A Cornucopia of Chamber Music 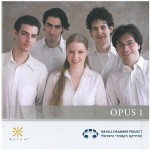 A highlight is Martinu’s lighter-than-air Chamber Music No. 1 (1959, for six musicians), one of his last works. Its three movements are a model of deft craftsmanship, fusing delicacy and intensity. A sprightly, folk-drenched Allegro moderato leads to a slow, magical Andante and a joyful Poco allegro, all played by the sextet with exuberance and zest.

Zorman’s violin soars when he teams up with Magen for Saint-Saëns’s Fantaisie for Violin and Harp (1893), with Magen adding a touch of flamenco guitar to his harp in the fandango-tinged closing pages. Substituting harp for the piano part, Magen has given Debussy’s Sonata for Cello and Piano a remarkable arrangement. It’s so persuasive that some listeners may have difficulty recalling the original, and helped in no small measure by the fleet touches of Magen and cellist Korman.

New Yorkers can hear the ensemble live on December 13 at Merkin Concert Hall, where it will perform works by Brahms, Bruch, and Sergiu Natra—along with Magen’s Debussy arrangement.

Written for the festival, and for the same instrumentation as the Moravec, Kenji Bunch’s Changes of Phase (1999) takes its name from a high-school chemistry term. Bunch, who studied viola at Juilliard with Toby Appel and composition with Robert Beaser and is on the Pre-College faculty, has written a strong set with a Copland-esque third movement and a rhythmically catchy finale.

Adam Abeshouse did the lion’s share of recording honors at Bridgehampton Presbyterian Church, creating a “you are there” feeling. And for MacCombie’s elegy—from a separate live performance—engineer Leszek Wojcik captured the music’s translucence.