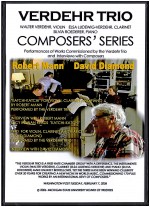 In the Third Symphony, commissioned in 1952 by the Erie (Pa.) Philharmonic Orchestra, the composer’s stoic persona is most evident. As Paul Schiavo writes in his meticulous liner notes, “Early in his career, Mennin established the tone of his musical rhetoric as sober and intense, and it grew more so as he matured.” Brass and percussion exult in the opening Allegro robusto, and a heartfelt oboe solo punctuates the earnest middle movement, which ends with the reappearance of the brass. The final Allegro assai breaks loose with emphatic themes, and although the entire orchestra gets a workout, the ever-present trumpets and trombones are never far away, yet never too loud. Schwarz tautly controls the balance of the ensemble as the symphony hurtles to its conclusion.

The Seventh Symphony (“Variation-Symphony”), in a single flowing movement, begins ominously with the cellos and basses before the rest of the orchestra makes its tumultuous entrance. Schiavo describes Mennin’s “complex and extraordinarily energetic counterpoint,” which the Seventh aptly demonstrates. The middle Allegro is particularly ferocious, followed by an anxious Andante—lyrical but never quite releasing its inherent tension—before a monumental finale.

The spacious recording, made at Seattle’s Opera House (and previously released on Delos International) is a fitting tribute to John Eargle, who died in 2007 after serving as Delos’s chief engineer, and Al Swanson, the Seattle Symphony’s audio recording engineer from 1983 to 2006, who died in July.

Verdehr Trio: Composers’ Series No. 1. Interviews with, and works by, Robert Mann and David Diamond. (2 DVDs; Michigan State University Board of Trustees)

Arnold Schoenberg described David Diamond (Juilliard composition faculty, 1973-1997) as “a young Bruckner”—one of the many startling facts revealed in this two-DVD set, filmed by Thom Marini (audio by Sergei Kvitko and Alexander Lim) with the eminent Verdehr Trio, a violin-clarinet-piano ensemble that has commissioned some 200 new works for that instrumentation, including the two heard on these discs. In 1999, violinist Walter Verdehr talked to Diamond about the composer’s 1994 Trio for Violin, Clarinet, and Piano, and the comments are interwoven with a live performance. Verdehr (B.M. ’64, M.S. ’65, D.M.A. ’70, violin) and his colleagues—his wife, clarinetist Elsa Ludewig-Verdehr, and pianist Silvia Roederer—give Diamond’s finely crafted score a polished and passionate reading.

Afterward, Diamond (who died in 2005) shows off some of his treasures, such as a framed letter from Ravel, whom he met in Cleveland in 1934. Ravel suggested that Diamond come to Paris to study with Nadia Boulanger (which he did). Diamond also met Stravinsky—and wrote a String Nonet for the elder composer’s 80th birthday—and recalls his awe when meeting Greta Garbo in Hollywood. Roaming further through Diamond’s home, the camera crew captures memorabilia from Hermann Scherchen (with whom Diamond studied conducting), Leonard Bernstein, Dimitri Mitropoulos (who commissioned Diamond’s Rounds for string orchestra), Albert Roussel, Francis Poulenc, and George Gershwin. Others in Diamond’s orbit included writers E. E. Cummings and André Gide, as well as choreographer Martha Graham (dance faculty 1951-77).

On the second disc, taped in November 2002, Walter Verdehr interviews Robert Mann, a founding member and first violinist of the Juilliard String Quartet from 1946 to 1997 (and who remained on the violin and chamber music faculties until last year), followed by a performance of Mann’s trio Katchi-Katchi (2002). The story (which Mann’s wife, Lucy, reads with delightful gravity) is a Japanese folk tale about a deceitful badger that gets its comeuppance from a clever hare. Although the clarinet takes the role of the narrator, in the trio’s charming interpretation, Roederer has most of the delightful tasks, occasionally striking the piano strings with sticks and blowing a whistle.

Mann discusses his early compositional studies with Stefan Wolpe, noting that his first date with his future wife was at Wolpe’s house. Later he recounts working with Mitropoulos, who commissioned Mann’s Fantasy for Orchestra. After Mitropoulos asked the composer to change the quiet conclusion to make it “more exciting,” Mann chuckles recalling the premiere, when Elliott Carter remarked on the “tacked-on, artificial ending.”