Doris Rudko, an internationally recognized teacher of dance composition who was a Juilliard faculty member from 1969 to 1992, died on October 29 at the age of 89. 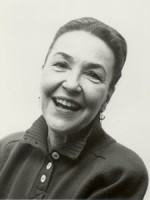 Doris Rudko in about the 1980s

Born in Milwaukee, Rudko was a graduate of the University of Wisconsin-Madison’s dance program, directed by Margaret H’Doubler (who had founded it in 1926 as the first dance degree program in an American university). Following her graduation in 1945, Rudko taught at New Trier High School in Illinois before coming to New York two years later to pursue a career as a dancer. During the 1950s she appeared in Broadway musicals, on television, and on the concert stage. Her choreographic credits include solo and group works for a number of other companies, as well as her own.

Rudko studied modern dance with Sybil Shearer, Hanya Holm, Doris Humphrey, Charles Weidman, Martha Graham, José Limón, and Merce Cunningham. She took dance composition classes with Louis Horst at Jean Erdman’s studio in the Village, eventually becoming his assistant at the Neighborhood Playhouse, the Martha Graham School, and the American Dance Festival. When Horst died in 1964, Rudko took over his classes at the A.D.F. until 1967, later teaching there using her own syllabus.

Before she came to Juilliard in 1969, Rudko had been a longtime faculty member of New York City’s High School of Performing Arts (1949-1963), at one point serving as acting chair of the dance faculty. She was on the dance faculty at New York University from 1972 to 1981, and appeared as a guest teacher in West Germany, Sweden, Italy, Greece, Taiwan, Hong Kong, and Switzerland.

Much beloved as a teacher (and featured in the Simone Wiest 2006 documentary Behind the Curtain: Being a Professional Dancer), Rudko influenced choreographers such as H.T. Chen, Robert Battle, Rebecca Stenn, Neta Pulvermacher, Stanley Love, Henning Rübsam, and Tony Powell. She served as a dance advisor to a number of companies.

Rudko was an associate editor of Dance Observer, contributed articles to numerous publications, and was a member of the dance screening committee of the Fulbright Scholar Program. She was a founding board member of the Martha Hill Dance Fund, and received the Martha Hill Lifetime Achievement Award (along with Donald McKayle) in 2004.

Contributions may be made to The Juilliard School for the Doris Rudko Scholarship Fund.