The Drama Division is in limbo. If you were to sneak in to the Stephanie P. McClelland Drama Theater these days, you’d see why. A seedy Bronx bar called Scales has slammed into the set for George Bernard Shaw’s Arms and the Man, and nobody has cleaned up the mess. But, why would they? This concept is the heart of the second mainstage offering from this year’s fourth-year class: John Patrick Shanley’s Savage in Limbo. 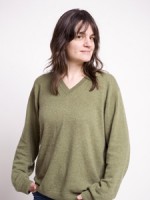 A fascinating and vividly inventive play, Savage in Limbo is the story of four lost souls, and the bartender who keeps them. On this seemingly-regular Monday night in the mid-1980s, these five tempest-tossed Bronx natives congregate in a squalid Bronx bar to seek relief from the growing disappointment and tedium of the outside world. Standing at the edge of life at 32, each character is searching desperately for meaning and direction in their lives. The play opens on Murk, a gruff bartender with a limited soft side and a wooden foot, and the complicated barfly he protects, the beautiful and damaged April White. The first to arrive at the bar is Denise Savage, a perennial loner who is depressed and disgruntled at the burden of her virginity, a manifestation of her inability to connect with anyone. The buxom Linda Rotunda enters next in the midst of a fraught weeping fit, distraught with a recent revelation/rejection from her current boyfriend, Tony Aronica. When the macho Tony finally comes bursting in shortly thereafter and announces that he is leaving her to date “ugly girls”—i.e. girls who have read books and can teach him something—Savage makes a move for Tony and the play spirals swiftly from brutal comedy to tense near-tragedy.

The play is a deeply personal one for Bronx-bred playwright John Patrick Shanley. Born in 1950 to a telephone-operator mother and a meat-packer father, Shanley spent the first eight years of his formal education at St. Anthony’s, a Roman Catholic school run by the Sisters of Charity religious order. He went on to the all-boy Cardinal Spellman High School, where he rebelled against the strict, no-nonsense priests who taught at the school. He spent many a night in Bronx bars like Scales, searching for meaning and purpose. Encouraged by his creative writing teacher, he went on to New York University, but left after a semester of poor grades and continued bad habits. He enlisted in the Marine Corps which, somewhat perversely, he liked for its Catholic-school style of discipline. He returned to New York University after his Vietnam War service ended and graduated in 1977 as the valedictorian of his class. Seven years later, he would go on to write his third play, Savage in Limbo, a work that he dedicates “to all those good assassins who contributed to the death of my former self.” Today, Shanley stands as one of our most celebrated living writers, the winner of the 1988 Best Original Screenplay Academy Award for Moonstruck and the 2005 Tony and Pulitzer Prize for best play for Doubt.

The theme of limbo—biblically, the place where souls linger on the cliff between heaven and hell—is one that has been translated into the set design for Savage in Limbo. Scales, a grungy mid-’80s dive, is fleshed out in realistic detail, but everything around it is slightly surrealistic. “I was intrigued by the idea of slamming something foreign into an ongoing machine,” said Pam MacKinnon, an accomplished New York theater director who has returned to the Juilliard mainstage to direct Savage after last year’s production of Lanford Wilson’s Burn This. The set is raised, floating three feet higher than stage level, the light grid has been lowered, and the bar is surrounded by pieces of scenery—columns, parts of a staircase, backdrops—from Arms and the Man, last month’s mainstage production. This compressed look gives the bar an actual state of limbo that mirrors the journey of the five characters trapped within.

In a recent interview, MacKinnon said it best: “I love that this play is set in a magical place that at first glance seems banal and even dismal. We’re in a dive bar, yet the drinks come from nowhere, music boxes are on hand, and Santa suits come and go. Plans get made: let’s move out, let’s live together, let’s marry. There is a sense that anything is possible, and yet the characters are stuck; there is an extreme tension between what everyone thinks is possible and what actually ispossible. I suppose this is always true both in life and in stories, but perhaps Shanley’s play points out something even truer: that we don’t dream big enough, let alone live big enough.”

Sonia Sotomayor: The Face of America