Ellen Taaffe Zwilich (D.M.A. ’75, composition) has a simple standard for accepting a commission: “I have the goose-bump test,” she explained in a recent interview. “If it doesn’t give me goose bumps, I don’t do it! Just thinking about writing whatever it is has to really get me excited.” 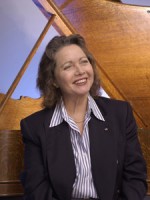 The Carnegie Hall audience will share those goose bumps on October 27, when James Conlon leads the Juilliard Orchestra in the premiere of Zwilich’s Symphony No. 5: Concerto for Orchestra, commissioned by Juilliard in celebration of the composer’s upcoming 70th birthday in April. It is one of two premieres serving as bookends to an extraordinarily busy season, even for Zwilich, whose music is among the most-performed of any of her American colleagues. (The other new piece, her Septet for Piano Trio and String Quartet, will be premiered in April at the 92nd Street Y by the Kalichstein-Laredo-Robinson Trio and the Miami String Quartet.) In between will be performances across the country, as well as a new disc from Koch of three Zwilich works recorded by the Chamber Music Society of Lincoln Center.

It seems almost quaint now to recall how Zwilich found herself an overnight celebrity in 1983, as the first woman to win the Pulitzer Prize in music (for her Symphony No. 1). The general public, weary (and wary) of an earlier generation of composers who were thorny intellectuals, began to discover something the music world already knew: Zwilich was quietly carving out a niche for herself as someone concerned with music as a very personal form of expression and communication.

A native of Miami, Zwilich had earned two degrees from Florida State University, freelanced as a violinist in New York, and spent seven years playing with the American Symphony under Stokowski before putting composing front and center, entering Juilliard to study with Roger Sessions and Elliott Carter. Pierre Boulez premiered her Symposium for Orchestra on a Juilliard Orchestra concert the year she graduated. The death of her husband, violinist Joseph Zwilich, in 1979 brought a softening in the sharp edges of her style, as Zwilich left severity and atonality behind for something more emotionally resonant.

Though she had turned down several residencies with orchestras, Zwilich was lured into the first Composers Chair at Carnegie Hall in 1995 with a simple charge: “Look around the music world, see what needs to be done, and we'll do it.” In four years, she launched the Making Music concert series (still running); held a workshop for young composers; began a video archive of interviews with major composers; and commissioned 10 short pieces for the Carnegie Hall Millennium Piano Book, introducing young pianists to the range of late 20th-century music. She also composed three works: her Peanuts Gallery (based on the Charles Schulz characters, and the subject of an award-winning PBS television program),Violin Concerto, and String Quartet No. 2.

Zwilich’s career as a performer may explain her lack of self-consciousness as she writes, the music evolving almost organically from her initial ideas. She begins by sketching everything out as quickly as possible, imagining people playing it. “There are always things you’re not sure about, but I think you get better at this over the years—the sense that it’s a palpable thing. The overall shape of things, the phraseology, the color—as with a performance, all these things are in there, not just the notes.”

The goose-bump test has taken Zwilich through a broad range of territory—from the understated riches of her Fantasy for harpsichord to the brashness of her Rituals for five percussionists and orchestra. “It’s interesting, what you bring to the table with an instrument that you really know, and an instrument that you know as an acquaintance, but now you must know it as a friend or a lover or whatever,” Zwilich laughs. “I basically love instrumental music. I love the people who play it; I love the whole ball of wax.”

The Juilliard commission resonated with her because Juilliard is where she “really found myself as a composer,” through her studies and “the whole quality performance scene at the School”—something behind her excitement about the upcoming premiere. “I like the idea that every chair is filled by a virtuoso, that they have this certain kind of energy, and the notion that everybody’s a soloist and a partner. There’s this kind of electricity that flows around an ensemble when everybody’s listening.” One movement is also a memorial to composers whose voices were silenced by tyranny, the subject of Conlon’s “Recovered Voices” project.

“Whether you’re a performer or a composer or a listener, music really engages every aspect of our humanity,” says Zwilich. “The older I get, the more experience I have, the less I’m able to say what music is. There seems to be this circle of communication when I do something, someone performs it, and someone hears it, and I don’t think we have any idea what it is. There’s this whole new field of people interested in music and the brain, but I haven’t read anything so far that comes near to explaining the way it pulls all of us together.”