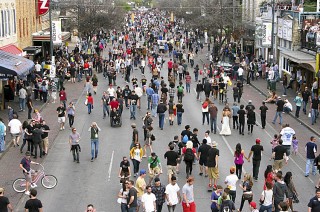 The South by Southwest Festival (SXSW) has evolved since its founding in 1987 from a jamfest to a huge jamfest and music-film-digital networking and marketing juggernaut. Over the past few years, classical music has established a presence at the festival.

Conservatories have long been considered places for young musicians to focus on the job-specific skills needed to pursue their chosen career paths, whether as a soloist, a chamber musician, or orchestral player. Although musicianship is vital in obtaining a job and pursuing a career in the arts, is it truly enough to survive in the ever-changing and increasingly more digital 21st century?

Classical music has become progressively less popular to incoming music consumers, and while the Internet provides a greater possibility of access for newcomers, the truth is that there aren’t many people in the media talking about classical music. And that may be preventing the genre from filtering into the malleable minds of students and other young adults, classical music’s future audience and donor base.

Alex Ross, classical music critic at The New Yorker, addressed this issue as a panelist at the 2012 South by Southwest (SXSW) in March. This annual music festival and conference in Austin, Tex., has morphed over the past 23 years into a six-day jamboree of film, music, and digital performance—and a marketing and networking marathon. For the past 100 years, Ross noted, many of our nation’s major artistic institutions—conservatories and orchestras alike—have become stuck in a traditional mindset when it comes to elements such as concert dress and programming, ideas that sometimes hinder the overall experience for classical music newcomers. Orchestras are “fighting for an image that doesn’t exist anymore,” Ross said, “it’s simply a fantasy.”

But while the outlook for classical music in the 21st century might seem dreary, a number of changes are providing young musicians with a new and improved outlook on the genre’s future. For instance, many technological tools have been developed that allow musicians to take charge of their own marketing with social media platforms, grass-roots promotional and fund-raising, and unexpected venues.

Festival panelist Ariel Hyatt, the founder of the social media PR firm Ariel Publicity, addressed the possibilities of social media at the conference. “Artists forget about the huge opportunity between the lines,” she said. If used effectively, platforms such as Facebook and Twitter have the potential to allow artists to attract and engage a wider audience in a more personalized way, she said. When engaging current and potential audience members via social media, artists must remember that it is not a one-way conversation. “Think about it as just a good party,” Hyatt added. “Have a conversation with one person on Facebook. Don’t think about it as if you are trying to have a conversation with thousands.”

Given that 75 to 80 percent of people who attend any given concert are already familiar with the performer, crowd-funding platforms such as RocketHub, Kickstarter, and Indigogo emphasize the importance of tapping into a fan base that already exists—friends and family—and these platforms are helping change the model for fund-raising from one based on large, well-endowed sources to individuals. “Crowd-funding shows that there is a huge power in lots of people giving smaller amounts” said SXSW panelist Eleanor Whitney, program officer for external affairs at the New York Foundation for the Arts. Whereas the typical grant-writing process may take months to see results, crowd-funding can be implemented almost instantaneously and the funding results are available to the artist within a very short time period.

Although it’s mostly popular music artists who are using crowd-funding tools today, classical musicians have started embracing the concept and some have seen tremendous success. Generally, the way the model works is that an artist who wants funding posts his or her project on a site such as RocketHub, states how much money is needed to fund it, and posts a list of potential thank-you gifts. In 2010, Evan Shinners (B.M. ’08, M.M. ’10, piano) launched a $5,000 RocketHub campaign to produce his solo album @bach. He ended up raising $6,355 from 45 contributors, giving them thank-you gifts ranging from MP3 files from the album or a handwritten poem to a private concert.

Alternative venues are another way classical musicians can reach out to untapped audiences who might not venture into a concert hall, but when provided with a less intimidating (and less expensive) venue, like a neighborhood bar, are much more likely to sample something new.

“Technology is allowing culture to create new, good music,” said SXSW panelist Justin Kantor, co-founder of Le Poisson Rouge, a Greenwich Village nightclub that has specialized in—and thrived on—having a mixed array of performers from all genres, from classical and jazz to hip-hop. With technology, Kantor added, “artists can build their own audiences.” In the past, musicians relied on a presenter to fill the room, but now middlemen, such as managers and labels, aren’t always necessary. “And when you get excited about something, you can move more quickly. It isn’t colossal like a symphony orchestra that works with a board and has a conservative outlook on things,” Kantor said.

Other models of alternative venues abound. Inspired in part by the success of Le Poisson Rouge, a Cleveland Orchestra flutist talked to the owner of the Happy Dog bar about presenting classical music, which it now does once a month. Opera on Tap, which started in 2005 as a way of presenting opera music in nontraditional venues, now has 12 chapters nationally. And SXSW itself, long a bastion of alternative music, started accepting classical music acts into its lineup of 2,000 bands a few years ago, and this year for the first time, six classical showcase acts were scheduled.

There was definitely a “social” buzz at this year’s SXSW—many panels were dedicated to social media, crowd-funding, and out-of-the-box performance spaces. And while classical music has lagged behind its popular music counterparts in using social media to enhance and enlarge its audience base, it’s beginning to catch up. These hip methods of marketing and fund-raising have the potential to resurrect and inject new life into the genre if used effectively. And with the tech-savvy generation that is currently attending the world’s conservatories, a classical revolution is here and growing.