As a musician who was invited by Jazz at Lincoln Center veteran Arturo O’Farrill into his highly-regarded Afro-Latin Jazz Orchestra as an undergrad, saxophonist and flutist Erica vonKleist (BM ’04, jazz studies) needs to prove to none that she takes music seriously. But at its best, music is serious fun too, and vonKleist’s artistry excels equally where she uses her craft to impart this idea to others. The 25-year-old Connecticut native and recipient of the first jazz studies Bachelor of Music degree conferred at Juilliard, in 2004, is riding out what she says has been an “amazing” journey ever since: vonKleist is gaining recognition as a multigifted artist who paints, records, composes, leads her two bands (one a trio, the other a quintet), and gigs with countless others. 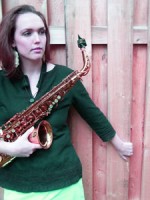 Yet she comes across as markedly effusive when describing her two teaching jobs, which involve either latecomers to music study, or young children. VonKleist isn’t waiting until the passing of her own heyday to share with broader audiences her love and knowledge of jazz music. For her, teaching younger groups in community settings strengthens her ability to conceptualize and express the basics of music.

“Working with kids has taught me to work through my ideas more clearly, because when you try to make a 5-year-old understand what a quarter note is, you have to be creative and clear in how your explain yourself, ” vonKleist says. That skill gets plenty of fair play in her teaching role with Feel the Music, a New York City program that provides creative forms of trauma therapy for 9/11 families. Her pupils study music in half-hour sessions, and they aren’t ones who can go home and practice. In this environment, she keeps the musical focus on goals of recreation, exploration, and self-expression.

Perhaps the love and joy vonKleist says she experiences working with kids (her “favorite audience”) harks back to childhood experiences of growing up surrounded by art and artists. Her mother is a painter and sculptor; her father, a Berklee College of Music graduate, is a professional singer, composer, and guitarist.

VonKleist’s musical and artistic chops developed superbly in her home environment. Add to that early foundation a secondary-school experience at West Hartford (Conn.) High that she laughingly calls “musical boot camp,” and the picture becomes clear: By the time she arrived at Juilliard, where she became an alto sax student of Joe Temperley, vonKleist’s musical backbone already was well-developed.

Some of the faces she now encounters working in New York City’s jazz scene are those of former classmates from Juilliard (and from the Manhattan School of Music, where she spent a year before transferring). If those faces happen to be overwhelmingly male, it’s a non-issue for vonKleist. The story of “I’m a Female Instrumentalist in Jazz” (a historically male-dominated world where tradition is slow to concede to the new) is a sidebar she prefers not to write.

“I’m always hesitant about that question,” says vonKleist, when asked how gender dynamics factor in her experience. “I’m a female. I don’t know what it is to be other than a female. Everyone experiences ups and downs, and I take it as that, having no other frame of reference.”

She is scaling down touring with her groups, which she says isn’t profitable at the moment. As she learns such career lessons, vonKleist adjusts and doesn’t lose the swing. By channeling newly freed energy and resources into building more successes locally, she positions herself to pull off better tours down the road. VonKleist continues to invest serious practice time on the heels of her successful 2006 debut CD, Project E, and she is set to follow up one high-profile composing honor with another. Having won the ASCAP Foundation’s 2006 Young Composer Award, she is composing a big-band piece, commissioned by Jazz at Lincoln Center, that will premiere in January. Her other teaching gig, through the Afro-Latin Jazz Alliance Academy of Music, recently launched in Brooklyn, and an online store for viewing and purchasing her paintings is accessible via ericavonkleist.com.

From a creatively rich childhood home to mentors like O’Farrill, and from recording opportunities with Chris Potter’s Tentet to early-career accolades from pre-eminent music institutions, the artistic gifts vonKleist can claim are extraordinary. And she knows how to keep giving as good as she gets.