Finding the Space for Truth Through Art 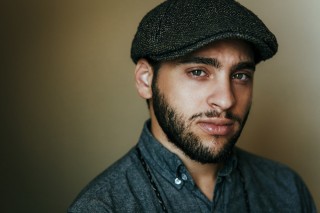 Alumnus Samora Pinderhughes conceived this article as he thought about the 30th anniversary of Juilliard's Martin Luther King Jr. celebration, on January 16. An incident that happened at the beginning of his junior year inspired Pinderhughes to create The Transformations Suite, an early version of which premiered in the 2012 M.L.K. event; a recording of it was released this fall and is available on for purchase on Amazon, iTunes, Bandcamp, Spotify, and other platforms, with free special packages available to educators, students, and other youth.

I remember the day that Troy Davis died. For those folks who haven't heard of Troy, he was an African-American man accused of a crime he didn't commit. Even when evidence came out that could have exonerated him and even in the face of worldwide pleas to the state—from the pope, former President Jimmy Carter, and Bishop Desmond Tutu—the state of Georgia did not grant a stay of execution, and on September 21, 2011, Troy's life was extinguished.

I went to Juilliard that day in a state of shock, trying not to feel the weight of yet another shattering of illusions I'd had about the relationship of my country to justice. I made it through all my classes, but when I went to a practice room at the end of the day, I broke down completely, crying for what felt like hours. Instances like these are what come to mind when I think about why The Transformations Suite was necessary for me and so many others during our time at Juilliard. In a country that denies humanity to so many, it is important to find spaces where you are seen and heard—and where you can tell the truth.

The Transformations Suite combines music, theater, and poetry to examine the radical history of resistance within the communities of the African diaspora. Continuing in the tradition of artists such as Bob Marley, Nina Simone, Marvin Gaye, Billie Holiday, and Tupac Shakur, it paints a musical picture of the current state of inequality and injustice in the United States and beyond. My starting point for the suite was a question: when and how did Martin Luther King's message become so safe? Why had history sanitized his message after his death, so that it had become an excuse to talk about how far we had come, rather than to push forward with radical imagination and urgency? My answer was to try to reclaim his legacy, and tell the truth about what he and others really stood for. The suite was a communal effort from the beginning, bringing together students from all Juilliard divisions; the first version had more than 25 people and the recording consisted of 10 classical musicians, seven jazz musicians, a dancer, and an actor. Coming together to make this work was the most incredible experience I had at Juilliard. It confirmed my desire to be a leader of my own projects and to take the risk of being an explicitly political artist who “reflects the times,” as Nina Simone said—and it led to my career as a multidisciplinary artist working in music, film, and theater. The suite, which has been performed internationally, also led to my involvements with both Blackout for Human Rights, which aims to end human rights violations in America through economic and artistic means, and the international Movement for Black Lives.

The yearly M.L.K. celebrations were a vital part of my college experience, bringing together Juilliard's communities of color in particular and creating space for us to assert the importance of our lives, our histories, and our cultures. So many students came together to make new work that directly addressed the intersections between art and social justice—and to talk about what it really means to be an artist and a citizen in this America. And they allowed us to make our presence known and to publicly show love for one another in the school that we treasured but that we also felt oftentimes rendered us invisible. I am overjoyed to hear that the Black Student Union has been brought back, and that an M.L.K. celebration will happen in January. It is essential that Juilliard as a community and as an institution embraces the union, and reckons with its complicity in creating a culture of erasure rather than recognition.

Juilliard was also where I learned about the importance of detail and not settling for something that is just O.K. when it could be excellent. In the context of school that concept just had to do with music, but it must be applied to everything. So I hope more people at Juilliard will keep stretching beyond their genres. We must revise the way we speak, the way we work, the way we think, and the way we act. We have to take a hard look at all of our institutions—policing, education, the electoral system—and consider starting from scratch. We must do better. And we must do it now. My hope is that The Transformations Suite will be part of this process; and that this new generation of Juilliard students will continue to make new work together with courage, conviction, and radical imagination.