Pianist Benjamin Laude, who graduates this month with a Master of Music degree and will return to Juilliard in the fall as a D.M.A. candidate in the C.V. Starr Doctoral Program, is the recipient of the seventh annual Juilliard Journal Award. The prize is given in recognition of outstanding contributions made by a student to Juilliard’s school newspaper. 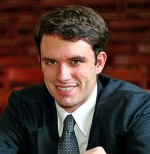 A native of Austin, Tex., Ben performed Rachmaninoff’s First Piano Concerto at the age of 17 with both the Austin Symphony and Austin Civic Orchestras. In the spring of 2007, the A.C.O. invited him back as a piano soloist in Saint-Saëns’s Carnival of the Animals. That same year, he took top honors in the Senior Concerto Division of the Kingsville International Piano Competition, performing Rachmaninoff’s Fourth Concerto, and in 2008 he was named a winner of the Yamaha Young Performing Artists award. In March of 2008 and 2009, Ben was featured in the Adamant Music School’s annual concert at Carnegie’s Weill Recital Hall, performing works of Scriabin and Brahms.

Ben earned a bachelor’s degree in piano performance in 2008 from Rice University’s Shepherd School of Music where he studied with Robert Roux. At Juilliard, Ben splits his piano studies between Jerome Lowenthal and Matti Raekallio.

In addition to his activities as a performer, Ben is actively engaged in more scholarly musical pursuits. He is currently researching topics in music theory and cognition in an independent study at Columbia University with psychologist Robert Remez and composer/music-theorist Fred Lerdahl as part of the Columbia-Juilliard cross-registration program.

Over the course of his two years as a master’s student at Juilliard, Ben wrote a wide variety of articles for The Juilliard Journal. Notable among them are an interview with visiting artist Alfred Brendel, pieces on a number of high-profile Juilliard events, including the American Brass Quintet’s 50th-year anniversary concert, Juilliard Opera’s 2009 production of Falstaff, a pair of Axiom concerts, and profiles of the Petschek and Bachauer winners. He also contributed a pair of political editorials to The Journal, and will continue to pursue his interest in writing on social justice and progressive politics at the Z Media Institute in Woods Hole, Mass., this June.

Student-written articles and original drawings constitute a major portion of The Journal. The Juilliard Journal Award was created in 2004 to recognize those students who not only make writing for the paper an integral part of their academic experience, but also keep the Publications Office aware of topics that should be covered in these pages. Students interested in writing for The Journal should contact the editor in chief at extension 341.