Of Guitars, Violins, and the Avant-Garde at MoMA

The Museum of Modern Art’s current exhibition “Picasso Guitars 1912-1914” seems almost tailor-made for Juilliard. The show has as its centerpiece a pair of three-dimensional guitars, one made in 1912 of cardboard, paper, string, and wire, and the second made of sheet metal in about 1914. Picasso valued both highly, photographing them extensively but refusing for a long time to allow them to leave his studio. In 1971 the 89-year-old artist made international headlines by giving the metal guitar to the museum. He later disassembled the cardboard version and also bequeathed the pieces to MoMA, which received them upon his death, in 1973. 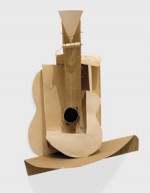 From 1912 to 1914, Pablo Picasso made a series of artworks involving guitars, some of which are currently on display at the Museum of Modern Art. One of two iconic guitar constructions, this one is made of cardboard, paper, string, and painted wire. 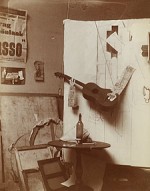 This latter work had already been on exhibit for many years when art historian Christine Poggi, noting that Picasso’s own photos revealed that he had originally placed a cardboard tabletop underneath it, asked the museum in December 2005 whether anything else had been packed along with it. Sure enough, paper conservators found the round piece still in storage. This may seem like an insignificant detail, but when we realize that for Picasso the ground was as important as the subject, we see that a vital piece of the sculpture had been missing.

The curator of this exhibit, Anne Umland, has used the opportunity provided by the discovery to create a sharply focused exhibition of some 70 of the artist’s drawings, mixed-media paintings, photographs, and collages made in the years bracketed by these two assemblages. Among them are not only guitars, but also a goodly number of violins.

Ironically, what Picasso loved most about guitars was probably not the music they connoted but their association with Spain—his native country—and, in particular, popular culture. He also enjoyed the shapes of both guitar and violin—perhaps it was their feminine curves he found alluring. If we are to believe Picasso’s companion from 1905 to 1912, Fernande Olivier, the artist had no interest in orchestral or experimental music. He reputedly stated that he had trouble staying awake when he heard the compositions of his periodic collaborators Erik Satie and Igor Stravinsky. Unlike his colleague and sometime-rival Georges Braque, who included the names Bach and Mozart in some of his compositions, Picasso turned to the songs of workers when he pasted sheet music on his canvases. It was without doubt the communicative nature of music (and of newspaper, which he also used in his collages) as well as the shapes of the instruments that appealed to the master.

Whatever the reason, the production of these guitars and collages out of cardboard, oil mixed with grit, wires, wrapping paper, newspaper, and other detritus was considered so revolutionary in Picasso’s day that, the story goes, some readers who subscribed to magazines that reproduced photos of them canceled their subscriptions. Critics refused to acknowledge the works as art and asked Picasso what they were. “It’s nothing. It’s el guitare [sic],” he replied, mixing French and Spanish. Since there had never been art work like this before, many people did not know what to make of this new form. As usual, Picasso was prescient: Collage and assemblage, now so familiar, only entered the vocabulary with Picasso’s introduction of them.

Since that time, nearly 100 years ago, artists and critics have changed their tune, calling these guitars among the most influential sculptures of the 20th century. In them, Picasso explored what reality is and what durability means (the metal was considered more valuable than the cardboard though both have withstood the test of time); and the “high” and “low” in art.

To pick out just two important collages in the show:

Guitar, Sheet Music, and Glass, now in the collection of the McNay Art Museum, in San Antonio, consists of cut-and-pasted wallpaper, newspaper (dated November 18, 1912), sheet music, colored paper, hand-painted fake wood-grain paper, charcoal, and gouache on paperboard. Considered by some to be Picasso’s first collage, this includes an actual piece of sheet music, as well as a pun. The name of the newspaper, Le Journal, has been cut so that you can only see “Le Jou,” which means “a game.” We do not know exactly what kind of game he was referring to, but the headline underneath reads “Le Bataille S’est Engagée,” which means “The battle is joined,” and is a reference to the war between the Balkan states and the Ottoman empire that was being waged at the time. It might also allude to Picasso’s “good fight” for a new kind of art or, more specifically, to his competition with Braque. The elegant composition in blue, fake wood-grain, and black is similar to that of another collage in the exhibit, Newspaper and Violin, dated about Dec. 1, 1912, which is from the Museum Ludwig in Cologne. It has similar colors and also includes “Le Jou.” But in this work, a clearly articulated violin with strings, bridge, and playful f-holes and scroll is pasted onto plain paper and accompanied by the headline “Un Chauffeur Tue Sa Femme” (“A Chauffeur Kills His Wife”). We are left to wonder what kind of “game” this is.

For a long time, art critics and historians insisted that Picasso included newspaper clippings just for formal purposes and that the text was arbitrary. But this view has been repudiated. In fact, the artist included dozens of legible newspaper clippings, most of which referred to politics or gossipy bourgeois doings. He also used dozens of musical scores. These can also easily be identified. And although some scholars have examined them, there is surely more to do here, and it would be a fascinating project for some enterprising music student.

Picasso’s working methods can in some ways be paralleled to those of a composer of classical music. Like Bela Bartok and many others, the artist collaged folk music into high art, and this exhibition showcases some of his many themes and variations. These themes include fractured guitars and violins, newspapers, sheet music, still lifes, and the occasional character. They range from simple to complex, from black and white to colorful, and from serious to silly. In them Picasso grapples with issues still unresolved today, such as the ephemeral nature of reality, and along the way he illuminates fundamental questions about art and the creative process.

The exhibit is relatively small and quietly beautiful. Unlike the much larger “Abstract Expressionist New York” exhibition, which comes entirely from MoMA’s own collection and was reviewed in the November Juilliard Journal (and runs through April 25), these works are borrowed from more than 35 museums worldwide and are likely never to be seen together again.