Jeffrey Kahane: Music and the Struggle for the Humane

Editor's note: This Spotlight on Jeffrey Kahane appeared in the October Juilliard Journal. After it was published, it was announced that, due to illness, Mr. Kahane had to cancel his appearance with the Juilliard Orchestra on October 25. Conductor James Gaffigan, who was recently appointed chief conductor of the Lucerne Symphony Orchestra and principal guest conductor of the Netherlands Radio Philharmonic, will replace Mr. Kahane for the concert; the program remains the same. 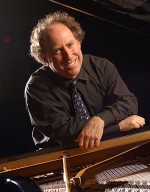 When he was only 14 years old, Jeffrey Kahane (’76, piano) had found in the piano something to build his life around. It was almost exactly this time that Kahane began lessons in his native Los Angeles with Jakob Gimpel, a Polish pianist and pedagogue of considerable stature in his day, who embodied the ideals of a world “which has, alas, now nearly vanished; a world where to speak of music was to speak of poetry, drama; of ethics; of narrative,” Kahane, 54, said in a recent e-mail to The Journal.

It was with Gimpel—a pupil of Eduard Steuermann and composition student of Alban Berg—that Kahane would discover in music a vehicle for something much more powerful than the mere sonorous combination of tones, something more humane.

“Over the years, I have tried my best to bring that sense of moral and ethical purpose to everything I do as a musician, and to transmit the sense that we are not just making beautiful sounds, but engaging in story telling, in acts of imagination and ethical choices,” Kahane said.

After hours spent attempting to minimize the involuntary pinky spasms in the long, cadential trill of a Mozart sonata, or trying to clearly pronounce each intervening voice in the stretto section of a Bach fugue, a pianist might wonder if there remains any ethical decision not involving three Advil and an ace-bandage. For Kahane, such physical obstacles are secondary to the more important psychological struggle to liberate one’s psyche on the stage. In his youth, he found a road to this liberation when experimenting with instruments and genres outside of the traditional classical idiom. Dabbling in folk and rock music on his guitar, exploring jazz and improvisation at the San Francisco Conservatory, and working in the pit for a Broadway musical, Kahane cultivated “a sense of freedom and spontaneity not only when it came to 18th-century music, but also in [his] sense as a performer on stage in general,” he recalled.

While at the San Francisco Conservatory in the 1970s, Kahane would also try his hand at conducting, though this aspect of his musicianship would not mature until he had already fully blossomed as a pianist after successes in the Van Cliburn and Arthur Rubinstein competitions in the early ’80s. Today he holds posts as music director of the Colorado Symphony and the Los Angeles Chamber Orchestra, both of which have won ASCAP awards for adventurous programming under his leadership. It is with the L.A.C.O. that Kahane is most fully realizing his quest to summon the ethical spirit of music, demonstrated in his founding of its family concert series, which provides him a chance to share his humanistic and spontaneous artistry with thousands of elementary school students each year.

Such philanthropic feats would not have been possible without making the challenging crossover from the artist’s bench to the podium. Through this physical and psychological struggle, Kahane has forged a symbiotic relationship between his pianism and his conducting.

“The opportunity to conduct Mahler symphonies, which are so enormous, has so vastly enriched my sense of color when I approach the piano as well as challenging me intellectually and musically in every imaginable way,” he said. “Of course conducting a Schumann or Schubert symphony changes completely the way one feels when one plays the piano works of those composers, and vice-versa ... one brings different concepts of sound from one medium to another.”

On October 25, Kahane will display his enriched concept of sound when the leads the Juilliard Orchestra in the music of Kodaly, Mozart, and Brahms. In returning to his alma mater, Kahane will eschew the conservative and micromanaged tendencies sometimes associated with conducting, and invite the orchestra to live a little more on the edge. In his words, “I hope that I’ll be able to bring all of my sense of joy and creativity to these rehearsals and the concert, and especially the sense of spontaneity and risk taking that it so essential to me.”

On the first half of the concert, Kahane will expose the lyricism of Mozart’s G Major Piano Concerto, K. 453—“One of the most operatic of all,” Kahane remarked in an interview in the Chicago Symphony Orchestra’s Beyond the Scoreseries. He continued, “I have no hesitation in confessing that I didn’t get [Mozart’s concertos] as a teenager. It really wasn’t until I suppose in my late teens or early 20s that I began to see them as incredible dramas—as operas without words.”

In keeping with the principles imparted by Gimpel during his youth, Kahane will go beyond the lyrical elegance on the surface of Mozart’s concertos, and explore the human narrative embedded within. “I think this music [is] Shakespearean in a certain way in terms of the delineation of character, the understanding of the most subtle aspects of human experience, and Mozart’s ability to get that across with the most subtle strokes of the pen is just uncanny.”

In Brahms’s C Minor Symphony, Kahane also sees a harkening back to a former master, namely Beethoven, whose symphonic legacy occupied a nagging presence inside Brahms’s psyche for much of his life. “I hope to be able to bring some fresh insights to the students as to what I think Brahms was exploring ‘intertextually,’” Kahane said. “That is, what he was trying to do in his great personal struggle to find a way to write a symphony in the footsteps of his master, Beethoven.”

Of course, all concerts must begin, and for Kahane, the decision to open with Kodaly’s Dances of Galanta was based on a more basic human impulse:

“The Kodaly was chosen, honestly, as an opportunity to ‘let the orchestra rip.’”