Kaplan to Be Schuman Scholar 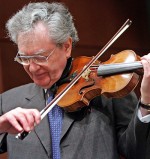 As the holder of the 2011 William Schuman Scholar’s Chair, violin faculty member Lewis Kaplan will give two lecture-recitals.

(Photo by Courtesy of the Bowdoin International Music Festival)

Faculty member Lewis Kaplan has two idols: Bach and Pythagoras. Pythagoras uncovered the divine ratios that define the musical tones of our existence. Bach craftily used those ratios to create works of art that are not only important pieces of the repertoire and pleasing to listen to, but also sources of allegorical mystery. Kaplan has said that “two of the greatest minds and greatest talents in all of history, Bach and Pythagoras, thought that music was perfection.”

Kaplan was recently announced as the 2011 William Schuman Scholar’s Chair, a position that was created in 1998 to celebrate the 50th anniversary of the founding of the Literature and Materials of Music Department at Juilliard. The prestigious designation is granted to one Juilliard faculty member each year in recognition of outstanding contributions to the School’s artistic and intellectual life. As a part of it, the recipient gives two lecture-recitals that highlight his or her career and perspective. Kaplan’s lectures will take place on February 23 and April 5 in Morse Hall.

“I feel very honored to be named to this chair,” he said recently. “It is a highlight of more than 45 years of teaching at Juilliard.”

Shortly after receiving his bachelor’s and master’s degrees at Juilliard, Kaplan began teaching Pre-College in 1964; he joined the violin faculty in 1976. In 1961, Kaplan founded the Aeolian Chamber Players, the first permanent, mixed-timbre ensemble, and three years later he co-founded the Bowdoin International Music Festival, which was recently named by Strad magazine as one of the seven best music festivals in the U.S. He has championed more than 100 new compositions, recorded for Columbia, CRI, Folkways, and Odyssey Records, and appeared as a soloist and conductor with orchestras around the world.

The topic of Kaplan’s first lecture-recital draws on his love of Bach and Pythagoras. It is inspired by a lecture he’s given for many years about the monumental Chaconne from Bach’s Partita No. 2 for solo violin, which he has described as “one of the great works in all of Western civilization.” The Schuman Chair lecture will also incorporate the fugue from Bach’s C Major Sonata. These two pieces “are both high points for polyphonic writing and some of the greatest violin pieces ever,” he told The Journal. “The L&M faculty felt this would inspire the students and give them a reason to do more than just learn the notes and play proficiently, but also to look for depth and reason in how to play the piece.

While the Schuman lecture won’t be the same as the Chaconne lecture, which Kaplan calls “God, Music, and Numbers,” there will be overlaps. The title derives from the fact that Bach was a devout Lutheran and had a strong belief in numerology, and the Chaconne not only utilizes the divine ratios of Pythagoras, but also of the golden section, a series of numbers that has many unique, intriguing mathematical relationships. The series, which was discovered by 13th-century Italian mathematician Fibonacci, exists not only in nature but also in the Renaissance works of some of the world’s greatest great sculptors, painters, and architects. By taking the complete amount of measures in a musical piece and dividing that number by 0.618 (the ratio of the golden section), the result is the measure that is at the golden section of the piece.

The topic of Kaplan’s second Schuman Chair lecture will be his role in helping to usher in a new era in chamber music via his founding of the Aeolian Chamber Players. “The members of the L&M faculty said to me, ‘you were in on the beginning, when the chamber music world began to change,’ and they thought it would be helpful to tell the students what that was like,” he said. Prior to the Aeolians, a flute clarinet, violin, and piano ensemble, string quartets, woodwind quintets, piano trios were the primary chamber ensembles. “With the Aeolians, the idea was to create a permanent repertoire,” Kaplan added. “We created that repertoire and it’s been played and choreographed around the world.” Kaplan hopes that talking about this experience, and that of co-founding the esteemed Bowdoin International Music Festival, “will inspire the students to look to their own future.”

For Savall, Music Is, Above All, Communication
For Christie, Score Is Framework for Personalization