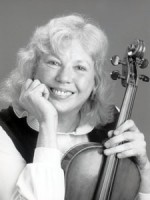 Tuttle was born on March 28, 1920, in Lewiston, Idaho, and upon completing eighth grade, promised her mother (a choir director) that she would practice the violin four hours a day if she could be home-schooled. Her mother agreed, and within a few years Tuttle had launched a successful career (including playing on film soundtracks in Hollywood), marred only by her physical discomfort with playing. She later said she would have quit had she not met William Primrose, a violist with the London Symphony Quartet, who looked so comfortable performing that she asked him if he would take her on as a student. He agreed, but only if she would switch to the viola—and move to Philadelphia, as he taught there, at the Curtis Institute of Music. The technique she developed as a result of her work with Primrose came to be known as the Karen Tuttle Coordination Technique.

Tuttle was one of the first women to play with the NBC Symphony Orchestra, and she made her Carnegie Hall debut in 1960. In addition to Juilliard and Curtis (where she was Primrose’s assistant), Tuttle taught at the Peabody Institute, Manhattan School of Music, and elsewhere.

When Tuttle retired from Juilliard in 2003, The Journal published reminiscences from her students, some of which are excerpted here.

Karen Tuttle’s extraordinary pedagogy consisted of many ingredients—her deep and inspiring love of music; her unique physical approach to the instrument; her warm, loving, and generous personality. She tirelessly helped us become the best performers and teachers we could be. She also insisted we learn to become good colleagues. Cut-throat competition and the resulting alienation were not tolerated in her studio. Instead, we were encouraged to engage in lively discourse, constructively criticizing when necessary, but always being supportive of each other. The magnificent result of this is that we, her students, became a family of sorts. I count some of my Tuttle “siblings” among my closest friends and most cherished colleagues.

Tut taught us to question everything and everyone—even her!—during lessons. She also taught us how to teach; not only did she want us to verbalize everything in order to make sure we really got it, but she required us to make comments in studio class about our fellow students’ performances. Tut treated each student with a fresh perspective: Even if I was the fourth Brahms sonata of the day, she approached me and our work together with great enthusiasm and energy. No matter what we were working on, it was all important and there was something to be learned.

Serendipity led Karen Tuttle’s path to cross mine when I was a sophomore at Peabody. Her revolutionary proposition that musical health is defined equally through body mechanics and spirit, and that both elements are reflected in sonority, was an immediate call for action [that] has accompanied my work to the present. Karen Tuttle’s initial attempts to sensitize her students to “body resonance” were extreme: we removed our chinrests and cut holes in the left shoulder of our shirts in order to better feel the vibration of the instrument! She taught us the essential—that to perform is to tell the news, and to tell it well requires aesthetic transparency, a generous spirit, and the courage to remain vulnerable.