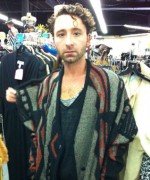 How long have you worked at Juilliard, and what do you remember about your first day? And what is one of your favorite memories?

I started here in September 2003 [he became the supervisor in August 2012]. I have no recollection of my first day except that I wasn’t nervous even though I thought I should be. Convocations always make for good memories. The event is so charged with excitement, anticipation, and pride that it is easy to share these emotions and feel part of the community.

What job at Juilliard would you like to try out for a day and why?
It would be interesting to spend a day in the life of a student. To experience the environment that we all work so hard to create through their eyes would be very informative.

What is the strangest or most memorable job you’ve ever had and what made it so?
I worked for the U.S. Department of Agriculture in New Hampshire as an enumerator, meaning that I called farmers and asked how much milk their cows were giving, how much grain and hay they were eating, and the current cost of the feed. Or I asked for their current cubic yard yield on the potato crops, etc. Sound boring? Well it was, except that the office manager was totally otherworldly (an amazing character study), and speaking with the farmers was always an adventure. Farmers are generally up before daylight, spend the day in the fields, and usually have dinner rather early, so there was never a good time for us to ask them about how well their farm was doing. And if we were able to get them on the phone, God help us—we heard the truth! I also spent time picking low-bush blueberries in Maine as well as building stone walls and digging clams—all backbreaking work but with the most hilarious characters in the universe.

If out of the blue your boss said to take the day off, what would you do with your free time?
Right now I would repot some houseplants. During the summer I would go to the beach.

How do you balance your job and your artistic endeavors?
Over the last few years I earned a certificate in horticulture from the Brooklyn Botanic Garden. Gardening and houseplants have always been one of my favorite distractions and hobbies. In this year’s plans for my roof terrace I will be moving more closely toward a xeriscape with a focus on aromatics. Costumes and gardening are both ways to nurture and create beauty through patience and care. Both involve the art of combining color, texture, and form to paint a palette that can motivate emotional reactions.

What was the best vacation you’ve had, and what made that trip so special?
Last year I traveled with friends to Amsterdam for a wedding. We performed a shadow puppet show at our friend’s wedding and lived on a houseboat. It was nice to spend time in such a wonderful city with people who grew up there and to experience the lifestyle from their perspective. What a civilized place—bicycles are respected as the best means of transportation and the culture is open-minded.

What might people be surprised to know about you?
Not much.

What is your favorite thing about New York City?
I enjoy the effort that has been made to preserve natural areas. When I first moved here, I was fully expecting to suffer from the lack of nature, and I did until I focused my energy on finding  beautiful oases. The parks and preserves are the greatest gift any urban dweller could ask for. I live near Fort Greene Park, which Walt Whitman rallied for as a place to “spend a few grateful hours in the enjoyment of wholesome rest and fresh air.”

What book are you reading right now and what CD are you listening to?
I am currently listening to Adele’s album 21, and reading William Faulkner’s As I Lay Dying, which describes a poor family as the matriarch dies and is laid to rest. The story is told from the perspectives of various family members—or is it?