The Many Sides of the Soprano Voice 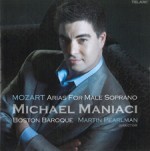 Most fans of Renée Fleming—including this one—probably never expected to see her name and that of the rock group Death Cab for Cutie in the same sentence. But the superstar soprano’s take on “Soul Meets Body” is one of the high points of her provocative new recording called Dark Hope, a forceful plunge into “indie rock.” Fleming, who studied at Juilliard in the 1980s, reveals a side of her voice that will no doubt startle many listeners, especially from the same artist who has been so triumphant in Massenet, Dvorak, and Richard Strauss.

Although Fleming delved into jazz with her 2005 album Haunted Heart and used to sing jazz as a student at SUNY-Potsdam, here she has tried something even more audacious—which will either bewitch or alienate her many fans. Often dwelling in the lower registers of her range, she could easily be mistaken for Annie Lennox. But Fleming finds her own road throughout, and it’s hard not to admire her ability to shed her operatic skin—she sounds as idiomatic as any rock singer. Producer David Kahne (who also engineered, arranged, and programmed the disc at New York’s Avatar Studios) occasionally runs wild with the instrumental portions, but for the most part, he frames Fleming’s tone with some appealingly jangly guitars (Band of Horses’s “No One’s Gonna Love You”), anthemic organ strains (Arcade Fire’s “Intervention”), and now and then, a bit of noise (the Mars Volta’s “With Twilight As My Guide”).

Most successful are Willy Mason’s “Oxygen,” given a flirtatious lilt, Tears for Fears’s “Mad World” with its air of pained sadness, and Peter Gabriel’s haunting “In Your Eyes.” In the latter and elsewhere, Fleming’s sister Rachelle, along with daughters Amelia and Sage, add backup vocals. The disc closes with Leonard Cohen’s “Hallelujah,” given a Boléro-like snare drum and some velvety strings. While I can’t say this recording will make me forget the artistry of The Beautiful Voice (graced with conductor Jeffrey Tate), Fleming is doing something rather daring here—and more power to her.

There are singers, and then there is Michael Maniaci, who veers away from calling himself a countertenor, since his range is about a sixth higher. Maniaci describes himself as a male soprano, thanks to vocal chords that didn’t grow and deepen his timbre, as they do for most men. A Juilliard graduate from 2003, he says, “My voice comfortably goes up to a soprano high C, and I’m most comfortable in the two-octave register from high C to middle C.”

This is a decidedly unusual gift, and he deploys it astonishingly in a new recording of Mozart arias with the estimable Boston Baroque, conducted by Martin Pearlman. Starting with sparkling Ah qual gelido orror … Il padre adorato from Idomeneo, Maniaci moves on to two excerpts from Lucio Silla (1772), a rarely performed opera penned when the composer was just 16. With expert control, Maniaci finds the thrills in Dunque sperar poss’lo … Il tenero momento, followed by the touching Ah se a morir mi chiama, the latter showing the singer’s impressive range as he tackles some enormous intervallic leaps, as well as his skillful ornamentation. And his final, unaccompanied cadenza, were it heard in concert, would have audiences breaking out in spontaneous applause.

Pearlman and the ensemble intervene in a robustly played Overture from La Clemenza di Tito, with the group’s period instruments in lithe, fiery form. (They open the disc with the similarly spirited Overture to Idomeneo.) Maniaci returns for Deh per questo istante solo, and Parto, ma tub en mio. But some listeners will be eagerly looking forward to the grand finale, the popular Exsultate, Jubilate, and it’s worth the wait.