I’ve been fascinated by the idea of running a marathon ever since high school, when I was a long-distance runner on the track team. But it wasn’t till the loss of my friend and classmate Jared Nathan that I actually found the motivation and courage to do it. 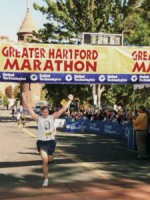 The author crossing the finish line of the Hartford Marathon. Thompson raised more than $5,000 for a scholarship honoring his friend and classmate Jared Nathan, who died last December in an automobile accident.

Upon hearing the news of his death last winter, the result of a car accident, I was filled with deep sadness, confusion, and frustration—but most of all, I was angry as hell, filled with a rage I’d never felt before. I paced my parent’s backyard for what seemed like hours, spoke to my dear classmates and teachers on the phone, held my fiancé … but could not get over this anger. When my father got home and saw the condition I was in, he simply asked: “How can you find a way to turn this tragedy into something positive and not destructive?” It was the kind of simple and poetic fatherly advice I didn’t want to hear at the time, but it reverberated for months to follow.

Earlier that semester, I had spoken with Kathy Hood (the Drama Division’s administrative director, and one of the greatest human beings ever) about possibly running the New York Marathon the next year, in order to raise money for the Drama Division—perhaps toward my class’s trip to L.A. for our showcase, or maybe for another show in our fourth year, but I wasn’t really sure. She thought it was a great idea and said she’d help in any way possible.

I’m not exactly sure when my conversation with Kathy clicked with my father’s advice, but when it did, I realized I could create something special that would honor my friend and keep his memory alive for years to come. When we returned from the holiday break, I told my classmates that I was going to run a marathon and raise money for a scholarship in memory of Jared. They loved the idea.

How does one actually train for a marathon? I knew I needed as much time as possible to get in shape for the 26.2 mile course. So I did what most uninformed folks probably do: I started running as long and as far as I possibly could. That lasted about a week. Then I became addicted to books on marathons, Runner’s World magazine, and an awesome Web Site called WalkJogRun.net (you put in your zip code and it maps out runs for you, complete with mileage, elevation, pacing guide points, etc.). I created a five-month training program to prepare myself for the race: basically a gradual buildup of miles per week with a long run at the end of each week, leading up to completing three long runs of 20 miles, followed by a three-week taper cutting the mileage to about 10 miles a week.

After the first few weeks of training—when it finally stopped hurting in every single muscle below my waist (and several more above)—I found out I didn’t get into the New York Marathon (some 98,000 people applied for 40,000 spots, which are awarded through a lottery system). My spirits weren’t shattered, because I found out that my hometown of Hartford, Conn., has its own marathon, only three weeks prior to New York’s, and they accept everyone. The one hitch: they don’t allow iPods or Walkmans on the course during the run. How was I going to train to run a 26-mile race without music? (Don’t they realize I go to Juilliard?) But this turned out to be one of the greatest gifts I’ve ever received.

Running without music allowed me to think about what I was doing and why. It turned into “my time with Jared.” For two to four hours a day, I got to be alone with the memories of my friend, and I felt like I could actually speak with him. I’d hear his voice yelling, “Faster, girl!”—or, on the long runs when I thought I couldn’t continue, “Come on, you dingleberry; you can’t quit now!” I didn’t realize it at the time, but those long runs in the dark at night, alone with Jared, were my healing process.

After about four-and-a-half months of training, the big day was upon me. I couldn’t sleep for about a week before the race. I wore a shirt I had made with a picture of Jared on it. Whenever I got tired or sore, I’d put my hand on his face and found the strength to continue.

The race was incredible; I literally smiled the entire time. It was a beautiful day, with perfect weather for a marathon. The course went through picturesque New England farm country ablaze with fall foliage, and concluded in historic downtown Hartford’s Bushnell Park archway. As I entered downtown and saw the arch about 500 yards away and heard the music and cheers at the finish line, I touched Jared’s picture one last time and felt an urge to go for an all-out sprint to the end. Right before the final turn into the park, I saw my father, who was jumping up and down and cheering. As I passed him, we high-fived and I suddenly remembered his advice to me the day Jared died. I burst into tears and ran harder than I ever had in my life. I passed my friends and family and crossed the finish line in three hours and 21 minutes. It was the greatest feeling I’ve ever had!

I finished 173rd overall, and 32nd in my age group—but most importantly, I was able to raise more than $5,000 for Jared’s scholarship. I can’t help but think that he’s somewhere laughing at me for doing all this. But hopefully, in a few years—after all of us who knew him while he was here are gone—some student will get a Jared Nathan Scholarship, and his memory will live on through them and their work.