A Marriage of Jazz and the Movies
December 2008/January 2009

Jazz and film have been strongly interconnected since the first feature-length “talking picture,” the appropriately titled The Jazz Singer (1927). Such jazz greats as Louis Armstrong, Count Basie, Duke Ellington, and Billie Holiday were featured throughout early Hollywood movies, often in cameo appearances. Biographies of musicians like Glenn Miller, Benny Goodman, and Charlie Parker, along with fictional portrayals of the jazz world, are a Hollywood staple. And film scores have frequently used jazz scores, either composed expressly or compiled from existing sources. In the history of the relationship between jazz and film, however, no jazz performer and composer has made a greater commitment or had a greater impact than Terence Blanchard, whose compositions for film and arrangements from his 1999 CD Jazz in Film will be featured when he appears with the Juilliard Jazz Orchestra on February 2. 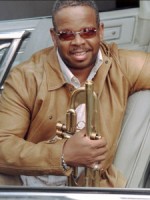 Terence Blanchard's compositions for film and arrangements from his CD Jazz in Film will be featured when he leads the Juilliard Jazz Orchestra on February 2.

Although Blanchard, 46, has worked with many directors in composing scores for some 40 films, it is his collaboration with Spike Lee on more than a dozen feature films and HBO documentaries that has done the most to establish him as one of the premier film composers of our time. Blanchard’s first encounters with Lee came when he was a musician playing on School Daze, Do the Right Thing, and Mo’ Better Blues, for which he also served as Denzel Washington’s coach in his role as a jazz trumpeter. As Blanchard told Gary Walker in a recent interview on the Newark-based jazz station WBGO, he became a film composer “totally by accident.” During the filming of Mo’ Better Blues, Lee heard Blanchard working at the piano on a new composition, “Soweto Blues,” and immediately asked if he could use it in the film. Lee was so impressed by the results of Blanchard’s orchestration of the piece that he told him, “You have a future in this business.” When Lee was looking for a composer for his next film, Jungle Fever, he thought of Blanchard, who has written the scores for all of Lee’s subsequent films, from Malcolm X in 1993 to the recently released The Miracle at St. Anna.

In a recent phone interview from his hotel room in Dublin, where he was in the midst of a three-month European tour as part of the Herbie Hancock Sextet, Blanchard emphasized how much composing film scores varies according to the specific project. “There are some films where music plays an extremely prominent and dominant role in the storytelling process, while in other films, it can take a back seat and add a more atmospheric and ambient texture," he said. "Spike Lee uses music as another character in his films, so the music will always play a stronger role in his films than with other directors.” Blanchard added that, for Lee, the melodic content is foremost.

When working on a film score for Lee, said Blanchard, he is brought into the process from the beginning. He will read the script, get photos from the set, and see rushes of scenes after they have been shot. He and Lee are constantly in touch during filming, discussing the size and scope of the score. Other directors wait until they have a more finished product to show Blanchard before he enters the collaborative process. When I asked whether one process was better than the other, he responded, “I think I write better music when the movie is better.”

Perhaps the project that has been closest to Blanchard in recent years has been the music he composed for Lee’s four-hour HBO documentary about the devastation of New Orleans caused by Hurricane Katrina, When the Levees Broke: A Requiem in Four Acts. Blanchard is a native of New Orleans and grew up with fellow musicians Wynton and Branford Marsalis and Donald Harrison, with whom he co-led his first band after serving his apprenticeship with Lionel Hampton’s orchestra and Art Blakey’s Jazz Messengers. After attending Rutgers University and living in Brooklyn, he returned to New Orleans, where he currently resides with his wife and children. Blanchard not only wrote the music for When the Levees Broke, but is interviewed through the documentary. Perhaps the most moving scene in the entire film is when Blanchard accompanies his mother, returning to her home for the first time after the flood.

Blanchard views the music he wrote for the film—and its expansion into his CD A Tale of God’s Will (A Requiem for Katrina), which won the 2008 Grammy Award for best large ensemble jazz CD—as part of the grieving process. In addition to the main themes from the documentary, the CD also contains compositions by the other members of his quintet: saxophonist Brice Winston, pianist Aaron Parks, bassist Derrick Hodge, and drummer/percussionist Kendrick Scott. When he was planning the CD, Blanchard was unaware that the musicians were all writing music for it, and says the musicians laugh about the way in which all the music fits seamlessly together.

Another aspect of Blanchard’s involvement with the revival of New Orleans after Katrina was his passionate lobbying to move the Thelonious Monk Institute of Jazz Performance, which offers an intensive two-year master’s program (of which he has been artistic director since 2000), from Los Angeles to New Orleans. An important aspect of the program is an extensive outreach program, where all the students go into middle and high schools to work with the younger musicians. According to Blanchard, he told Tom Carter (the institute’s president) that if he could think of another city more deserving of the community outreach program, he would back off. Since April of last year, the Monk Institute has been affiliated with Loyola University of New Orleans.

Blanchard’s visit to Juilliard will reunite him with Carl Allen, artistic director of the Jazz Studies program. Allen was the drummer in Blanchard’s first band, which he co-led with Donald Harrison; appears on the CD Jazz in Film, which features compositions by Duke Ellington, Bernard Hermann, André Previn, Alex North, and Blanchard, among others; and has played on other projects with Allen. According to Blanchard, “Working with Carl has always been a great thing. We’ve kind of come along together. He’s always been a great musician and he has just been growing with everything he does. I’m glad he’s at Juilliard because he has a lot of information to offer students.” The same can be said of Blanchard, who is on record as stating that, “... if I wasn’t a musician I’d like to be a teacher.” Both aspects of Blanchard’s life and career will be on display when he visits Juilliard in February.