On a Mission to Empower Youth Around the Globe

Joseph W. Polisi should be proud. 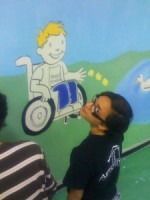 Natasha Roja was one of the campers/group leaders who helped design and create the annual mural project this past summer in Homestead, Fla.

The current president of The Juilliard School has always wanted his graduates to be flag bearers of artistic excellence and social consciousness. Today, through ASTEP, a group of Juilliard alumni are doing just that.

ASTEP—an acronym for Artists Striving to End Poverty—was conceived by the well-known Broadway music director Mary-Mitchell Campbell, during her tenure on the drama faculty at Juilliard. While volunteering at Mother Teresa’s mission and elsewhere in India, she became convinced that performing artists like herself could help those in need by serving them through their art.

At the same time, the founding members of the student group ARTreach (which has a similar mission) were about to graduate from Juilliard. They knew they wanted to continue the work they were doing on a larger, professional level, while passing ARTreach on to current students eager to pick up the baton. Thus, leaving ARTreach behind at Juilliard, they pooled their resources with Campbell’s, and in 2006, the new nonprofit organization ASTEP was born.

In its mission statement, ASTEP declares that it “uses the arts as a tool to empower young people with creativity, knowledge, and a strong sense of self-esteem; factors which help them advance their lives and communities.” The organization also enables artists to connect with youths around the globe, using their gifts to create change. Current ASTEP efforts include arts camps for disadvantaged children in Florida and South Africa, as well as unique opportunities to serve as volunteer teachers in an ASTEP-run orphanage in India. In each of these areas, ASTEP increases its effectiveness by partnering with local nonprofit organizations with related goals.

In Homestead, Fla., for example—an area designated as “hyper-poor” by the Department of Children and Families—ASTEP partners with EnFamilia, Inc. to provide dance, drama, music, poetry, playwriting, literature, and visual-art workshops free of charge during the summer for the children of Homestead. During that time, the students are able to work with volunteer arts professionals in a safe and inspiring environment. Collaborative projects, including murals and theater pieces, are created and shared. For many students, this is their first exposure to the arts and getting to know the likes of Shakespeare, Chopin, and Martha Graham. Issues relevant to the children’s lives are also explored; the subject matter is diverse and ranges from self-empowerment and gang violence to H.I.V./AIDS awareness, as the children are encouraged to communicate their realities through the power of expression. Says former ASTEP program director Abby Gerdts (Drama, Group 33), “The amazing thing is that a child will write a play about rape or alcoholism or abuse, and it’s usually a direct reflection of what’s going on in their lives. That’s where the partnering organizations come in … to deal with the fallout of a child finally being able to talk—even through a mask—about what’s going on.”

Eighteen-year-old Natasha Rojas, who has been through several sessions of camp, speaks passionately about the change effected in her life. “Living in Homestead is hard,  especially during puberty. I had very low self-esteem. I went to the first orientation and Mo [Mauricio Salgado, Drama, Group 34, a founding ASTEP member] was so full of life and energy. I had never met anyone like that before, and I wanted to be that way and be confident in myself.” When she first started camp, confesses Rojas, she didn’t plan on coming back; now she dreams of being a visual arts teacher. “I love the feeling of teaching kids and want to make it my career.”

ASTEP is indeed striking on several fronts: its cognizance of the all-encompassing nature of poverty; its awareness that at-risk and underprivileged children have little access to arts education; and its ability to tap into artists’ intrinsic need to simultaneously perform and serve. Perhaps it is the latter that truly sets this organization apart, as well as the extraordinary number of Juilliard graduates involved.

As Campbell observes, there’s a contagiousness about the work and a common vocabulary Juilliard graduates share that makes it easy to bring them into the fold. “You come back from these experiences and you’re changed; other people see that, and want to be a part of it,” she explains. “Also, we just love Juilliard students because they are very, very creative.”

Their years at Juilliard seem to have been crucial to enhancing these artists’ involvement. Beth Konopka, a dance graduate of 2005 who now serves as chief operations officer of ASTEP, draws parallels between the rigors of her dance training and her role today as a fund-raiser. Salgado admits he was often tempted to leave school and “become a missionary for the cause of humanity,” but realized that staying at Juilliard would give him tools to create profound change. Maxwell de Paula (Drama, Group 36), a program facilitator for Homestead, says he uses his Juilliard training on a daily basis. “I do workshops about conflict, domestic violence, gang violence—I make them physical and engaging, because if you lecture the kids, it goes right through them.” And as Gerdts (who now volunteers with the United Nations High Commissioner for Refugees in Istanbul) explains, “The training I received at Juilliard has helped me in almost every aspect of my life, but particularly with this work—not just the exercises and philosophies but just saying yes; the priority is to have fun and be creative with these kids who have so little.”

While these alumni all excel in their own fields—Konopka danced with the Pascal Rioult Dance Company; Cindy Salgado, a 2005 dance alumna and a founding member of ASTEP, received a Princess Grace Award for her work—they do not see their artistic careers and their work at ASTEP as being at odds. Mauricio Salgado puts it succinctly: “As an arts educator, I only feel comfortable facilitating conversation about my craft if I am current in practice.” He adds, “To an extent, we’ve never lost the sense of ‘What are we doing? Who told us we could do this? Where did this come from?’ None of us have an M.B.A., none of us were trained for this in an institution ... but I think that we are paving a path for ourselves, and the act of paving it is very exciting.”

Cindy Salgado says that she constantly tries to give more than she receives, but it’s impossible. “Every experience has brought me so many deep connections with beautiful people, both fellow artists and our students. These relationships have fed my life and keep me motivated to live playfully and passionately.”

Perhaps it is no small coincidence that the goals expressed for ASTEP have a lot in common with President Polisi’s aims for his students. In the preface to his book The Artist as Citizen, he stated: “Performing artists must no longer believe that their ‘work’ stops at the end of a performance. Active involvement of artists-citizens who are well-informed about the political, economic, and social components of our world will be the only way to realize the positive impact of the arts on our schools, organizations, and this nation as we move forward in the 21st century.”

Campbell’s desires for ASTEP resonate with that sentiment. “Beyond the basics for the kids that we work with,” she says, “we want them to know what it is to be an active citizen—what it means to take control of your life, and what it means to be able to give back to your community. We are definitely creating young leaders whom we hope are going to spread the same kind of amazing ways that art can transform communities everywhere they go.”

Konopka sums it up: “I really want to see new generations of artists being aware that that definition of career and focus can be broadened and expanded to include giving back to your community and being involved in a child’s life, even if it’s only for one summer—that even that small amount of time is changing other people’s lives. I want future generations to know that they have an option to do this kind of work that’s fantastic and extremely fulfilling. I want to inspire people with my story, telling them how I got involved with ASTEP and how I’m contributing and discovering talents that I had no idea I had. I think it’s all about opening up your perspective.”

Eunice Wong: A Multiplicity of Perspectives
Leigh McCloskey: Riding the Waves of Possibility