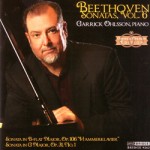 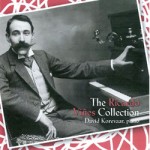 In a welcome reissue of Garrick Ohlsson’s sixth volume of Beethoven piano sonatas (originally on Arabesque), the pianist shows an extrovert’s take on the Sonata No. 29 in B-flat Major (the mighty “Hammerklavier”), and the earlier, more lighthearted Sonata No. 16 in G Major. In the monumental later opus Ohlsson, who received a B.M. from Juilliard in 1971, wastes no time in demonstrating the sonata’s volatility, the opening Allegro tingling with authority. His passagework is strong without being strident, yet his careful dynamic management underlines the drama. And as impressive and articulate as Ohlsson can be in fortissimo passages, he is almost more memorable in those moments of relative repose.

Ohlsson dispatches the brief, ticklish Assai vivace with stunning confidence, and then the Adagio sostenuto appears like an immense lake, slowly filling up with tears in front of our eyes. He patiently draws out the composer’s themes as they rise and fall in anguish, all the way to the reverent closing bars. In the final Allegro risoluto, a finger-twisting double fugue, he heroically captures the music’s protean personality.

The Sonata No. 16, written 16 years before the “Hammerklavier,” is more conventional (well, by Beethoven’s standards), yet bursting with creative euphoria. Ohlsson makes the most of the fleet opening’s high spirits and ringing octave leaps, as well as the relentless triplets in the final Allegretto, with its abrupt and quiet close. In between, he gives the delicate, almost Schubertian Andante grazioso a slight smile underneath its sobriety.

Recording wizard Adam Abeshouse gives Ohlsson a crisp soundstage from Purchase College in New York, and for die-hard pianophiles, the instrument is a Mason and Hamlin CC 28051 rebuilt in 1994 by William Schneider, head of piano technology at Michigan State University School of Music. And in an unexpectedly generous touch, the notes credit the piano tuner and technician, Edward Court.

During the 1890s a rebellious mélange of musicians, artists, and writers organized themselves under the galvanizing nickname of Les Apaches (“hooligans”). The group included composers such as Igor Stravinsky, Maurice Ravel, Manuel de Falla, and Florent Schmitt, as well as a handful of visual artists and literary types. There was even an amusing imaginary member, “Gomez de Riquet,” an entity whom Ravel created as an excuse for quick exits from dull evening affairs.

One of the members, Catalan pianist Ricardo Viñes (born in 1875 in Lérida, Spain) premiered many of the group’s piano works, and his collection of more than 800 scores eventually found its way to the University of Colorado. Working with archivist Laurie Sampsel, pianist David Korevaar (who received a bachelor’s degree at Juilliard in 1982 and a master’s a year later) has assembled an intriguing program of mostly lesser-known composers Viñes championed, most of whom are all but unknown to 21st-century audiences.

The entire program has been recorded with unobtrusive naturalness by Silas Brown, also working at Purchase College, the source of many fine recordings over the years. Throughout, Korevaar displays the dedication and cool head of an artist who knows that his repertoire choices are knocking on long-forgotten doors.