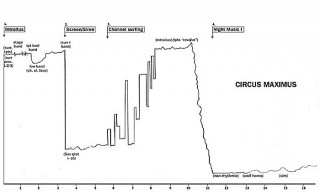 When he composes, faculty member John Corigliano plots out the emotional and time arcs first, as shown in this example from his Third Symphony, Circus Maximus. 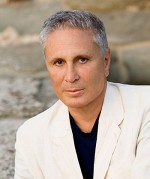 My first lesson with John Corigliano brought something to my attention that I had never considered before. It has to do with how a composer thinks of a piece before it is written. While there are about as many ways to write music as there are composers in the world, all have some things in common. We all need something to write with, some sort of instrument, and some way to tap into our creativity and actually produce musical sounds that can be written down. In other words, content: motifs, phrases, melodies, textures, themes. How each composer generates that content differs, but there must be content in order to start a piece, just as there must be words in order to produce a sentence. Composers also need a form—something to generate the musical grammar of a piece. It could be a well-known structure like the sonata form, which is so versatile it can be used with a vast range of instrumentation and ideas; or it could be a form that has been conceived to work with just one piece. Again how this form is generated varies from composer to composer, whether it is using an established structure, a mathematical matrix, an outline, or even (in the case of John Cage and his acolytes) by rolling dice.

John Corigliano has taught me to create large-scale form by creating an architecture for it. I used to write by sitting down at the piano and hammering away, improvising until I worked out some content. I would then write from start to finish, letting the music go its own way and allowing things grow and develop at their own pace. I learned quite a bit from doing this, but at times I found that I had written myself into a compositional trap and needed to find my way out. I liken it to free-form writing. Say you want to write a story but start with no plan about where it is going. Maybe you’ll come up with a character or two, but you haven’t planned out any sort of dialogue, argument, conflict, or even a basic story line. That process doesn’t seem very focused, does it? Why not create an outline, or thought bubbles, or character abstracts? The way I was writing music before lessons with John was like that: fun, interesting, but unfocused.

During my first lesson, John challenged me to step away from the piano and try something new. He told me something like, “When an author writes a story, he creates an outline; when an architect designs a building, he draws a blueprint doesn’t he? Why should music be any different? It should be a work of art, like a beautifully designed building, but it should also be structurally sound and have a solid foundation, like a well-constructed building. In this way, a composer is an architect.” He then pulled out his blueprint of Circus Maximus—his Third Symphony, which the Juilliard Orchestra will perform at its Carnegie Hall concert. The blueprint is a graph in which the horizontal axis represents time as the piece progresses; the vertical axis represents the emotional intensity of the music. In this way, you can see how he approaches and moves away from each climax over time. It’s also a good way to see the proportions of each section and how they make up the whole piece. You can see instrumentation of certain motives, tempo markings, and physical representations of what the music sounds like.

Constructing one of these graphs requires that the composer conceive of the content, in a general way at least, away from the instrument and along with the form. The composer needs to have a solid idea of what the music should sound like before the instrument or instruments are even used. It’s a very interesting way to look at music because it allows you to plan out an emotional experience, or a construction and destruction of sound and emotion, before writing. When I think of the music that has influenced me most, I realize that the pieces I love create a unique emotional experience. Each of my all time favorite composers may not have drawn a blueprint of the experience, but as I said before, how we generate form differs from composer to composer. John Corigliano’s process is a unique and immensely effective way to generate form. It’s also an eye-opening way to think about music—as a constructed emotional experience meant to stimulate every aspect of our human nature. It has certainly changed the way I perceive and create music and has allowed for magnificent pieces such as Circus Maximus to be created.