My Mother, the Entrepreneur

To encourage students in my fall semester Musician as Entrepreneur class to move beyond the usual conservatory mindset (practice = success; or, if you just play “better” than the competition, you’ll land that one big job), I introduce the idea that a happy, successful career (as opposed to a job) is the result of making informed, proactive choices, and not the result of vague hopes and wishful thinking. I asked the students to learn by example by interviewing an entrepreneur they admire as a sort of case study, and to ask them some of the following questions. What defines the mindset of an entrepreneur? How do education, upbringing, experience, and personal and professional relationships contribute to success? What challenges might one encounter in order to envision a place for an idea or product? And most of all, how does all of this pertain to a cellist, or an oboist, or a composer? In short, how do they define success and how have they gone about achieving it? The following essay by Anna Brumbaugh surprised and delighted me, and I asked her if she would share it with The Juilliard Journal.
—Benjamin Sosland (M.M. ’03, D.M.A. ’08, voice), Administrative Director of Historical Performance 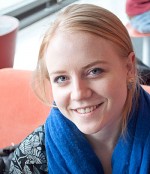 The person I interviewed is my mom, Maria Uspenski. She has been an inspiration to me for my entire life, and a huge part of her influence stems from her diverse background. She was born in the U.S. to Russian immigrant parents. Her first language was Russian, and she did not begin to learn English until she was 5. Her mother was a piano teacher and her father a mathematician.

My mother moved from Poughkeepsie, N.Y., to New York City when she was 10 years old to train with the School of American Ballet and attend Juilliard Pre-College for piano. She was raised in the city by her grandmother, a rehearsal pianist at the Metropolitan Opera. My mom recounts stories of doing her homework under a grand piano while her grandmother accompanied the famous singers of her day. Interestingly, my mom inadvertently learned basic Italian from listening to thousands of hours of Italian operas.

At the age of 17, my mom was asked to join the New York City Ballet, an achievement that had been the culmination of all of her work up until this point in her life. She was at City Ballet at its peak, under the direction of George Balanchine and dancing to the compositions of Igor Stravinsky.

Everything in her life was seemingly perfect. However, all of her hopes and dreams came to a crashing halt when she was 17: she broke her ankle twice in one year and was told that dancing was no longer an option. Her entire life had led her to be a dancer, and without this direction, my mother felt completely lost. My grandparents, having had the foresight to pull my mother out of this depression before she lost the will to do anything, decided to send her to Paris to attend high school.

While dancing in New York, my mother attended the Professional Children’s School and did not receive the proper high school training that most kids her age were used to. Parisian schools, especially, pride themselves on grueling academics and preparing all of their students for formidable careers. Knowing no French, my mom was sent off on a plane (mostly against her will) and arrived in Paris with three addresses of potential host families. She chose a woman with a Russian name and quickly became part of her family. For close to a year my mother struggled to learn French, and eventually began her time at one of Paris’s top high schools, the Lycée Fénelon. Her time in France opened up her mind to a new culture, a new language, new people, and an entirely new way of life. Her dancing seemed like a past lifetime, as she had never stretched her mind in so many different ways as she did in Paris.

Returning back to the U.S. after three years in Paris was painful for my mother. She had adopted a new way of life that to her did not exist anywhere else. New York was for dancing, not academia. But she was accepted into the Massachusetts Institute of Technology for mechanical engineering and began to make a new life for herself in the States. She was one of only three girls in her class of hundreds of boys. She was completely outnumbered. While at M.I.T., my mother took up rowing crew on the M.I.T. team. Her success in the boat led her to a spot on the 1980 Olympic Rowing Team, but unfortunately, that was the year that the U.S. boycotted the Olympics to protest the U.S.S.R.’s invasion of Afghanistan. My mother graduated at the top of her class and was immediately offered a job at I.B.M. in Poughkeepsie.

Based on how the first 23 years of her life played out, one can predict that a desk job at I.B.M. was not going to be quite the life my mother had always imagined. After meeting her husband—my father—and having two girls, my sister and myself, my mom quit her job, and ended her marriage. She was too strong to sacrifice everything she had worked for just to be another anonymous worker in a cubicle. As a single mom in a tiny house, my mom started her own very successful software company. Economically satisfied, but still emotionally craving something deeper, she still felt that there was more she could offer the world.

My mother is a two-time ovarian cancer survivor. She was a single mom for both of her bouts with cancer and would send my sister and myself to my father’s house on the weekends while she would go in for chemo. She fought the battle largely by herself and has now been cancer-free for over six years. In 2004, she founded a loose-leaf tea company, The Tea Spot. Since she came from a Russian family, tea has always held an important place in her life, but conquering cancer shed a new light on the health benefits of tea. She has expanded the company into a worldwide presence with its size and scope growing daily. Through this company, she fulfills her passion of traveling. Many trips back to Paris for distribution of the European line and several tours of the tea-growing regions of China have broadened her worldview greatly. She has met countless remarkable people along the way, and has developed lifelong friendships by doing something that she loves. Her company has spread awareness for the need for cancer research as well as the incredible health benefits of tea. Ten percent of the profits are donated to cancer research, a significant portion that makes a huge difference in the lives of many people. Happily remarried in Boulder, Colo., my mother has a life she’d never imagined.

My mother taught me that the most successful people always work the hardest. That was her number one rule. She said that the best New York City Ballet dancers were not always the best. But they put in their time after class day after day and eventually rose to the top. The other philosophy to which my mother adhered was to always be the best. If you do something, give it absolutely everything you have and make sure you are the best at it. She always asked me, if you’re not the best, why are you bothering to do it? She had no previous knowledge of rowing crew, nor did she plan on becoming a professional athlete, but she still set her goals on being the absolute best. Lastly, the driving force of her philosophy is to never settle. She strives to never be simply comfortable. She is constantly thinking of the next big thing, or the next best place to travel, or a new language to learn. Even at an age where most people are looking forward to the years ahead of lazy afternoons on the golf course, my mother is looking to move back to New York and starting a new chapter of her life here. She is constantly pushing herself past her comfort zone, and constantly astounds everyone with what she is able to accomplish.

Looking back on her life, it seems that everything came her way. However, my mother worked for absolutely everything that she accomplished. She worked to be a dancer, she worked to learn French and attend the lycée, she worked to rise to the top of the class at M.I.T., and, in an obese, skeptical society, my mother managed to create a successful tea company. Nothing came easily, but my mother always believed that she could succeed. In 2004, the odds were against her to start a health-conscious tea company, but she created the niche rather than looking for one. She taught people about the health benefits of tea rather than waiting for people who already knew about them. Fortunately, the health craze of understanding nutrition and publishing calorie counts at fast-food restaurants came a few years after the company started. This was a helpful boost to the already profitable company, but was not the sole reason for its success.

I really enjoyed conducting this interview. Thinking about my mother as an entrepreneur made me take a look at her life from an entirely different perspective, not as a daughter but rather as an observer. I also realize now just how fortunate I am to have such a powerful role model so close to me.