The following events in Juilliard’s history occurred in February: 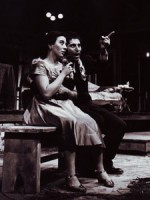 Kenneth Marshall in T.S. Eliot's Murder in the Cathedral, 1976

1976  February 17-22, the 25th anniversary of the New York premiere of Tennessee Williams’s The Rose Tattoo was celebrated during a week of drama productions at Juilliard. The revival of The Rose Tattoo, directed by Gene Lesser, was given February 17-18 in the Juilliard Theater—the first occasion the theater had been used for plays. Original music by faculty member David Diamond was restored for the first time since the premiere in 1951 (the score had been lost for years). The production was paired with the first Lincoln Center performances of T.S. Eliot’s Murder in the Cathedral, directed by Stephen Aaron in the Drama Theater, February 20-22.

1989  February 3, the fifth annual Focus! festival, “The ’60s Revisited,” concluded with the U.S. premiere of Alfred Schnittke’s Violin Concerto No. 2, performed by violinist Renée Jolles and the Juilliard Orchestra led by Otto-Werner Mueller. Also on the program were Krzysztof Penderecki’s Threnody to the Victims of Hiroshima and Dmitri Shostakovich’s Symphony No. 14, with soprano Susan Rosenbaum and bass Valentin Peytchinov. The festival examined the music of the 1960s in six evenings of concerts by 200 Juilliard students from the Music, Dance, and Drama divisions. Other festival highlights were the U.S. premiere of Gilberto Mendes’s Motet in D Minor for Chamber Chorus, Mauricio Kagel’s Atem, Elliott Carter’s Double Concerto in honor of the composer’s 80th birthday, Jacob Druckman’s Valentine choreographed by Gerald Arpino, John Cage’s Theater Piece, and a performance/discussion of Terry Riley’s In C.