Italian conductor Roberto Abbado will make his first visit to Juilliard on March 31 to conduct the Juilliard Orchestra in Avery Fisher Hall, in a program that features Busoni’s Berceuse élégiaque, Op. 42; Bartok’s Piano Concerto No. 3 (with soloist Vikingur Olafsson); and Mahler’s First Symphony. In early February, Maestro Abbado spoke by telephone from Milan with Mitchell Crawford, reflecting on the upcoming concert as well as the forces that have shaped the 54-year-old conductor's career. 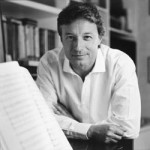 Roberto Abbado will conduct the Juilliard Orchestra on March 31 in Avery Fisher Hall.

Mitchell Crawford: I would like to ask you first about the repertoire that you have chosen for the Juilliard concert and what made you choose it. Obviously you’ve conducted a great deal of opera, but you also tend to conduct Mozart and the late Romantic repertoire, so is this a departure for you, this more modern repertoire?

Roberto Abbado: The program that I chose is based on three composers that lived and worked in New York. The Busoni piece—Busoni came to New York to [perform and] teach piano … He was at that time considered one of the greatest pianists, and one of the most prominent composers and scholars. His books about theory and music are, I believe, very important. The work that I chose was premiered by the New York Philharmonic conducted by Gustav Mahler in his very last concert in New York, which actually was the very last concert of his life.

Bartok spent more time living in New York than Busoni and Mahler, and his piano concerto was also composed in New York. It is totally different from the first two piano concertos, but a strong work typical of the last Bartok years.

Mahler, finally, is there because, again, of the New York connection. This is not a piece that was premiered in New York; it was premiered in Budapest, although Mahler was not even thinking to come to that city. It is a great challenge for any orchestra, and for students I believe it is an amazing opportunity.

MC: Is this your first time working with a student orchestra?

RA: I have worked many times with students and many times with American students, actually. Every time I get an invitation from an American educational institution I try to go. I have conducted the New World Symphony in Miami, the summer version of the Indiana University music school in Bloomington, the Chicago Civic Orchestra, and the Music Academy of the West in Santa Barbara, Calif. I have also done some readings with the Curtis Institute Orchestra and the Manhattan School of Music.

MC: Would you say that in working with students you are presented with different challenges and opportunities? How would you say the experience is different?

RA: There is a great enthusiasm and a great energy that comes from all student orchestras. Of course, the Juilliard School Orchestra has the reputation of having students of a very high level and I am expecting to find them extremely prepared technically and musically.

MC: What are some of your goals when working with students at that level?

RA: The goals are not different from the goals that I always try to reach with any orchestra. That is to say, to make music—to make good music—at the highest level. I would like to have a performance full of passion where everything has been carefully programmed during rehearsals, and a strong, believable musical impact.

MC: Tell me a little bit about your own musical development as a student and how you became the musician you are today.

RA: I spent my student time mainly in Italy. I only had one experience abroad, in Vienna, where I went to meet and study—unfortunately, very shortly—with the famous [Austrian conductor and] teacher, Hans Swarowsky, who unfortunately died [a few months later, in September 1975]. He was very, very old, and a teacher of some of the greatest 20th-century conductors. In Italy I started studying piano, then composition, and then conducting. I had the chance to meet another very famous and important teacher, Franco Ferrara, with whom I spent time in Venice at Teatro la Fenice, and then in Rome at the Academy of Santa Cecilia.

MC: Would you say there are inspirational conductors that had a very formative influence on your own style?

RA: I think about the two teachers that I mentioned. They both had a strong influence on me. Franco Ferrara was a man with a great musical instinct, a true animal for music, and he was a real Italian conductor in the tradition of Toscanini and [Victor] de Sabata. Hans Swarowsky was more intellectual, very well informed, and that was amazing because when I met him it was 1975. I was very young and he was very old, but what I found amazing was that he was extremely well informed about performance practice. That, in these years, was for me something that was totally unknown. Other conductors—obviously, I want to mention my uncle Claudio [Abbado], whom I met and to whose concerts and rehearsals listened many times. During my years here in Milan at La Scala I had a chance to see at work many of the greatest conductors. The one that really shocked me was Carlos Kleiber.

MC: He was known for unusual interpretations of modern music.

RA: He was simply a genius. I don’t have any other word to define him. Something really out of this world.

MC: What would you say it was about him—the way he interpreted the music he performed?

RA: It was unbelievable in the true meaning of the word. Every piece, everything he conducted was simply the best I had ever heard.

MC: Are you working on anything currently? Are you planning any projects or engagements?

RA: I am coming to New York at the end of this month to perform with the Metropolitan Opera Verdi’s Ernani. I have many performances during March and April. The last studio recording I did was one year ago, an album with the tenor Juan Diego Flórez which was released by London Decca. A new recording, a DVD, will be released soon of the New Year concert I conducted on January 1 at Teatro la Fenice in Venice.

RA: This is a very tricky question because I do not think there is a good answer to give. Any answer I would give might be misinterpreted, so if you will forgive me, I prefer not to answer.

MC: Of course. Would you like to make a comment about your experiences guest conducting and its particular challenges?

RA: Yes. I can say that I have enjoyed very much all the engagements I have had in the past few years. I have had many great experiences. I have a sort of permanent position with the St. Paul Chamber Orchestra in St. Paul, Minn. It is a great chamber orchestra. We did a European tour in January last year that went extremely well. We are planning a new European tour two years from now. I see my relationship with them growing week after week and I am very excited about it.

MC: How would you say, having worked a great deal in Europe and also a great deal in the United States, the audiences differ? Are people in Europe generally more appreciative of classical musicians, or do you see enthusiasm here as much as in Europe?

RA: I see enthusiasm everywhere. It depends on the quality of the performance and the quality of the music we musicians offer. I think every audience is different because every city is different. As I always say, there is a difference between New York and New Jersey, so I cannot generalize about European and American audiences. Every time it is different; every audience is different, and I think every orchestra is also different. I say this because the tendency today is to say that orchestras everywhere have the tendency to play equally. I don’t agree. I think orchestras have shown different personalities and I think this is great, and this is how it should be.

RA: I think we have covered everything. The only thing I would like to add is about my Italian teacher, Franco Ferrara, who was one of the most important conducting teachers of his time. He went everywhere to teach. He came to America several times. He went to Tanglewood, but he also came to The Juilliard School. When I was a student, I remember his comments about the Juilliard School Orchestra. Great comments. I mean, really, great, great comments. I remember him saying he could not understand when the students—he mentioned how the string students made slides so perfectly—had time to meet and do everything in the same way. So again, I am expecting something really extraordinary.

MC: Thank you very much for this interview.

RA: It was my pleasure. Thank you.