Preparing for the Proms

The Juilliard Orchestra Goes to London

This summer, members of the Juilliard Orchestra traveled to London to join Royal Academy of Music students for the BBC Proms on July 16. The program, which was conducted by John Adams, included his City Noir as well as the Ravel Piano Concerto in G and Respighi’s Feste Romane. Native Londoner Hannah Sloane, a second-year cello master’s student, recounted that hectic day. 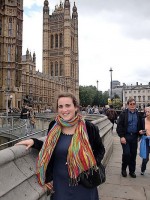 7 a.m. I wake up at home in South East London. Its day 10 of the Juilliard/Royal Academy tour. After nine evenings of socializing in two time zones, my first thought is of ...

7:15 a.m. …coffee. The previous evening, about 30 members of the orchestra had come over for a barbecue at my parents’, and as I’m wandering around with my mug, I feel incredibly grateful that my parents seem to have finished off the rest of the washing up before going to work. I scribble a thank-you post-it to them and get ready to go.

8:15 a.m. I get on the crowded commuter train going to South Kensington and start to feel properly excited about the day.

9:30 a.m. The doors open for our dress rehearsal at the Royal Albert Hall. At the stage door, security guards are giving out BBC Proms performer passes to the members of the orchestra. Although I don’t usually keep concert mementos, this pass seems like a keeper!

10 a.m. The rehearsal begins on stage. Everyone is still a bit glazed by the sheer size of the space. We start to rehearse Respighi’s Feste Romane. It’s amazing that even this piece, the loudest piece in the world, seems to disappear into dark, oval vaulted ceiling.

10:45 a.m. After rehearsing a few more spots in the Respighi, half of the orchestra decamps to the stalls seats to listen to Imogen Cooper run through Ravel’s Piano Concerto in G Major. As I listen, I’m struck by how beautiful her playing is, and how cohesive the orchestra sounds. It’s remarkable how two schools of players can come together so quickly and successfully. Maybe it’s because British people sort of invented America.

1 p.m. Our dress rehearsal ends amid hearty applause from the orchestra for our conductor, John Adams, who has directed the 10-day project with enormous commitment and a great sense of humor.

2 p.m. I sit down with friends for a cozy lunch at Thai Square in South Kensington. Throughout the trip, reciprocal tour guiding has been happening. In New York, we Brits have been guided around famous venues such as the Brooklyn Bridge, Empire State Building, and Harry’s Burritos; we’re finally able to reciprocate with Big Ben, Covent Garden Market, and a variety of pubs, all named after monarchs’ body parts (the King’s Arms, the Queen’s Head, the Prince Regent’s Nose, etc.). The final sight is the Victoria and Albert Museum, where a group of people are now headed, but jet lag has finally got the better of me and my roommate, fellow cellist Sofia Nowik, so …

6 p.m. Frantically run around the hotel room getting ready, amid yells of “Do you have another bobby pin?” and “This isn’t televised, right?”

6:30 p.m. I meet my parents and two older brothers at the restaurant upstairs in the Royal Albert Hall for a sandwich. My family is so happy to be coming to a concert I’m playing in that is 2, rather than 2,000, miles from where they live!

7:10 p.m. The dressing rooms are divided into RAM ladies and Juilliard ladies. Everyone has totally ignored the signs and mixed together, a final indicator of the mutual friendliness that has characterized the project.

7:35 p.m. Baton down, concert starts! Playing to an audience of at least 3,500 people, some standing within feet from us, gives the orchestra a giddy adrenalin. It feels more like being onstage at a rock festival than a classical concert.

9 p.m. John Adams whirls us through his City Noir symphony, a blockbuster that feels perfect for the event.

9:40 p.m. After the final applause has subsided, everyone heads out the stage door to greet friends and family, happy with a great performance.

10 p.m. The post-concert reception starts at our hotel in Gloucester Road.

Later In a cab back to my parents’ house, I reflect on the whole project—and especially on how awesome it was to work with my friends from both New York and London. As the cabbie is winding his way through the South London maze, I think for the thousandth time that I should live here again soon. When it comes to paying the fare, I think again ...