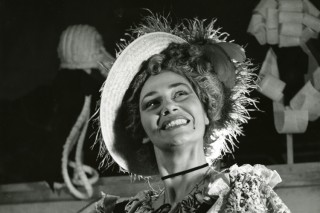 (Photo by Fritz Henle, Courtesy of the Juilliard Archives)

December 24, 2016, marks the 65th anniversary of Gian Carlo Menotti's Amahl and the Night Visitors, the first opera commissioned for the fledgling media of television. Mezzo-soprano Rosemary Kuhlmann (BS '51, voice), who sang the role of the Mother in that production, spoke to Journal assistant editor Joshua Simka (BM '14, voice) about how she came about the opportunity and what it was like to work with Menotti. 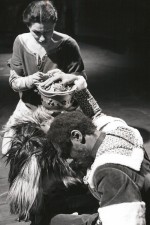 Rosemary Kuhlmann, who grew up on Staten Island and worked as a Morse Code operator during World War II, had no formal voice training before coming to Juilliard through the G.I. Bill. She studied with Lucia Dunham (1910, voice; faculty 1921–56) and loved her coursework in music, French, German, Italian, and piano. The summer before she graduated, Kuhlmann auditioned for and was accepted into the famed professional chorus of Robert Shaw (faculty 1946–50), where she says she developed a lot of discipline, but she broke her contract to sing the role of the Secretary in Gian Carlo Menotti's The Consul on Broadway and on tour. And then Consul producer Chandler Cowles encouraged her to audition for the role of the Mother in Menotti's new opera. After she sang five songs, she recalled, Menotti told the 29-year-old Kuhlmann, “You're a little young, but we'll make you look older and Biblical.”

NBC had paid Menotti $5,000, “one of the largest sums paid by a radio network for musical work,” The New York Times reported at the time, and was given a deadline of December 1, 1951, to complete the one-act opera, for which he also wrote the English libretto. But the large fee apparently didn't inspire haste in the composer, a notorious procrastinator, and Kuhlmann received the score—about four pages at a time—by mail. He called Kuhlmann as he wrote, asking questions like, “What's your high note? Do you have a high A?” (She did, and Menotti included it in the quartet for the Mother and the Three Wise Men.) With help on the orchestration from Samuel Barber, Menotti managed to finish the piece and the cast began to rehearse shortly before the premiere.

Menotti had based Amahl on Hieronymus Bosch's painting of the Biblical story of the Three Magi, which hangs in the Metropolitan Museum. Amahl, a crippled, impoverished shepherd boy and his mother are visited in the middle of the night by the wise men—King Kaspar, King Melchior, and King Balthazar—who are on their way to pay homage to the newborn Jesus. The Mother steals some of Melchior's gold to help her son. The understanding king tells her to keep the gold and in exchange Amahl offers his crutch as a gift to Jesus, whereupon he discovers that his leg has been miraculously cured. Amahl's mother allows him to accompany the three kings on the remainder of their journey.

When asked if the thought of singing an entire opera on live television had given her pause, Kuhlmann dismissed the idea. Of Menotti, the director (Kirk Browning), and the conductor (Thomas Schippers) she said, “We were a young group and I never thought about it! Actually, Gian Carlo and I really tried to sort of zone in on the boy,” who was played by the 12-year-old boy soprano Chet Allen. “I didn't have time to think of myself. I had to keep reminding him to look me in the eye while singing.”

“Amahl opened the doors for me,” Kuhlmann told Opera News in 2007. She sang more than 30 performances with New York City Opera between 1952 and 1955 and alsotoured (again) as the Secretary in The Consul and as Meg in Damn Yankees. In 1961, Kuhlmann sang her last NBC Opera performance: Sarah, Brigham Young's first wife, in Leonard Kastle's Deseret.

After raising her children, Kuhlmann began a corporate career, working as an executive assistant at Pepsi and at the Westchester Conservatory of Music for nearly 20 years before moving to Rhode Island to be closer to her daughter. These days, in addition to spending time with her five grandchildren—“I still vocalize sometimes when I want to make a point to them,” she says—she enjoys her computer and listening to classical music. Her advice for aspiring singers? “Don't drink. Don't smoke. And smile a lot when you're singing something happy.”