Lawrence Rhodes, artistic director of the Juilliard Dance Division, is one of four artists being honored this year with an award from Dance Magazine. The annual award ceremony takes place on December 8 at Florence Gould Hall in New York City. The presenters for this year’s awards, which recognize leading members of the dance field,  include last year’s recipients: Harvey Lichtenstein, who will give the award to Pina Bausch; Damian Woetzel, who will present the award to Ethan Steifel; Judith Jamison, who will introduce Sylvia Walters; and Deborah Jowitt, American dance critic, author and choreographer, who will honor Rhodes. 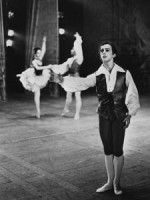 Rhodes receives this award after more than 40 years of inspiring the dance community. His broad background illuminates his virtuosity as a performer, artist, teacher, and director.

Rhodes was born in West Virginia in 1939. Two years later, his family moved to Detroit, where he first studied dance with Violette Armand. He took his first job with the Ballet Russe de Monte Carlo and then spent four years with the Joffrey Ballet. In 1964, he joined the Harkness Ballet as a principal dancer and later, artistic director (a position he shared with Benjamin Harkarvy, his predecessor at Juilliard). After Harkness disbanded, Rhodes served as a guest artist with Het National Ballet in Amsterdam. He then returned to the United States for two years as a dancer and artistic director of the Milwaukee Ballet. During the following six years, as a principal dancer with the Pennsylvania Ballet, he appeared in ballets by Tudor, Limón, and Balanchine. He also performed as a principal dancer with the Eliot Feld Ballet (where he often partnered acclaimed dancer Carla Fracci).

In 1981, after three years as a teacher at N.Y.U., Rhodes took over the chair of the university’s dance department. He remained there for eight years, during which he brought about valuable changes in the curriculum and repertory. In 1989, he accepted the directorship of Les Grands Ballets Canadiens in Montreal. Just as he had done with N.Y.U., and Harkness before that, Rhodes introduced significant changes to the program for Les Grands, most notably selecting ballets that would be unique to it alone.

After returning to New York in 1999, he frequently freelanced as a master instructor to many reputable companies, including American Ballet Theater, Le Ballet de l’Opéra de Lyon, Ballett Frankfurt, and Nederlands Dans Theater. It was in 2002, after the untimely death of Benjamin Harkarvy, that Rhodes was offered the position as director of the Juilliard Dance Division. Under his leadership, Juilliard dancers have given performances that have been acclaimed around the world.

As a dancer, teacher, and director, Rhodes’s expertise and visionary qualities have been unparalleled. Combining the strength, grace, and sensitivity that brought him fame as a dancer with the wisdom he gained as the director for several prestigious dance programs, he is able to impart knowledge to Juilliard students, guiding them towards a heightened technical ability and artistry.