Rob Nairn was born in Toronto and grew up in Australia. He studied at the Canberra School of Music, where he earned a bachelor’s degree, and at Berlin Hochschule der Kunste, where he earned a postgraduate diploma. His career has incorporated traditional orchestral and historical performance, as well as contemporary music and jazz, and he has performed with such ensembles as the London Philharmonic, English Chamber Orchestra, Florilegium, Orchestra of the Age of Enlightenment, Bavarian Radio Symphony, London Sinfonietta, Gruppe Neue Musik, and the Pittsburgh Symphony. He joined the Juilliard faculty in 2009 and is also on faculty at Penn State University, where he has worked since 1999. Previously, he taught at the Sydney Conservatorium of Music and the Elder Conservatorium of Music in Adelaide, Australia. 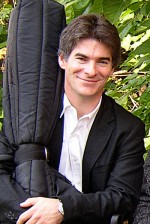 I think from the age of about 10 I knew that being a musician was the only thing I ever wanted to do. I can’t recall a specific incident—I actually don’t think there was one—but I was always drawn to music and never seriously contemplated another career.

Who was the teacher or mentor who most inspired you when you were growing up and what did you learn from that person?
There were several people but first was my father. He is not a trained musician but he listens with such passion. I remember listening to great old recordings of Beethoven symphonies on Sunday afternoons in our home; I’m sure he didn’t know what he was instilling in me then. There have been several musicians of course who were huge influences on me later—my teachers Max McBride, Klaus Stoll, and Tom Martin; the cellist Danny Yeadon, with whom I worked in Florilegium in London for many years; and others with whom I have had the great pleasure to work: Anner Bylsma, Pieter Wispelwey, Frans Bruggen …

What was the first recording that you remember hearing or buying? What was its significance to you?
My parents bought me several EPs for my 10th birthday; they were the first records I owned (the Beatles, Frank Sinatra, etc). All the earlier recordings I owned were pop, rock, and jazz. My first “classical” records were Brahms’s F-Minor Piano Quintet with Eschenbach and the Amadeus Quartet, Pollini playing Chopin, and Beneditti Michelangeli playing Beethoven. Our daughter was born to Brahms so I guess that’s never left me.

What’s the most embarrassing moment you’ve had as a performer or in your career?
Just prior to a live broadcast concert from a chamber music festival in Australia I bumped the bridge on my bass getting on the stage, hard enough that it made quite a noise and several people gasped. I was a little nervous and didn’t notice that the bridge was just about to fall over. I had already tuned and after the piano introduction when I went to play my first note I realized that the strings were sitting on the fingerboard and all I could do was buzz—I sat there for a moment totally embarrassed before making a very quick apology to the audience, rushing off stage, resetting my bridge and then coming back on and playing the recital … I just wanted to be anywhere but on that stage right then!

If you could have your students visit any place in the world, where would it be, and why?
Whether it is with me or in another context, I hope they get to play in some of the world’s great halls: Concertgebouw, La Scala, Bayreuth Festspeilhaus, Berlin Philarmonie, Royal Albert Hall, Musikverein, Glyndebourne, Grosses Festspeilhaus Salzburg, Wigmore, Bolshoi Zal, Haydnsaal, Carnegie Hall, Teatro Colón, Sydney Opera House. These places have such extraordinary history, they are the spaces that so much of the music we play was written for or premiered in.

What are your non-music related interests or hobbies? What would people be surprised to know about you?
I trained for many years in martial arts and earned my black belt in soo bahk do. I love to fish, to cook, and I have a good wine cellar (long ago I started a degree in oenology). But mostly I love to spend time with my wife (of 20 years) Heidi and my kids Giselle (9) and Teja (7).

If your students could only remember one thing from your teaching, what would you want it to be?
There are many things I use, like mantras, which I heard from my teachers: “There is a musical solution for every technical problem,” “Play all music in as historically informed a way as you can,” “Be passionate about everything you do.”