Ross Is Listening to the 20th Century

As developing musicians, many of us are aware of the dichotomy between the classical and the popular realms of music. Alex Ross, the music critic of The New Yorker, also seems to be aware of this issue, and he shared some of his thoughts during the first doctoral forum of the 2007-08 year on October 20. 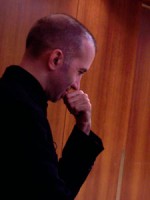 Alex Ross, the music critic of The New Yorker, was the guest speaker at a doctoral forum on October 20.

(Photo by Photo by Jennifer Fuschetti)

Alex Ross has served as The New Yorker’s music critic since 1996, prior to which he was a music critic at The New York Times. The recipient of two ASCAP-Deems Taylor Awards for music criticism, he has also received fellowships from the American Academy in Berlin and the Banff Center. His education includes piano and compositional training as a youth. At Harvard, he pursued studies in European history, English literature, and music theory. Now on tour promoting his new book, The Rest Is Noise: Listening to the Twentieth Century (Farrar, Straus and Giroux), Ross presented to the Juilliard community a discussion on his book, his experiences as a music critic, and his thoughts on American music audiences.

In order to understand his perspective, one must understand Ross’s background. Though he gave us a synopsis of his upbringing and musical development, for a more complete understanding one should read his essay “Listen to This” (February 16, 2004) available on both Ross’s Web site (www.therestisnoise.com) and The New Yorker’s online archive. Throughout his childhood, Ross knew only classical music—through recordings conducted by the likes of Bernstein and Toscanini. Not until his college years did he come into contact with popular music. As a Harvard student, he hosted a classical music show on the campus radio station that was immediately followed by a punk-rock show. In his essay, he writes that the rockers were “easily the most interesting people I’d ever met,” and he “abandoned the notion of classical superiority.” After college, he spent time in California exploring the punk-rock world as a member of the Berkeley punk club. He describes selling off his classical CDs “in order to pay for more Pere Ubu and Sonic Youth.” Eventually Ross returned to listening to classical music—but with a new understanding of it, one that gave him the ability to appreciate the subtleties of many genres of music. His current writings address the music of Radiohead, Björk, Morton Gould, Duke Ellington, and Sibelius, among many others.

At the doctoral forum, as Ross spoke of his shifting appreciation, he recalled wondering if people with no exposure to classical music might gain understanding of it through a similar experience in reverse. During his time in radio, he remembered, some of the jazz DJs drew these very correlations between free jazz and the 20th-century avant-garde music that Ross was programming.

Thus began Ross’s efforts to bridge the gap between classical and popular music audiences. The Rest Is Noise offers an overview of 20th-century music history with societal and cultural connections for readers who are not necessarily versed in music history or theory. At the forum, Ross explained that he wanted to add his journalistic point of view to the music of the 20th century by synthesizing several major events in music’s development. His book, he said, does outline the modernists and their different languages, but he was very interested in political and societal events that influenced major musical figures. One incident he cited involved Richard Strauss conducting the 1906 Austrian premiere of his Salome in Graz. Members of the Second Viennese School were in attendance, and it was rumored that Hitler was also in the audience—an ironic juxtaposition, inasmuch as Hitler’s rise to power and crimes against the Jewish people were behind Schoenberg’s eventual flight to America. The book also explores some of the propaganda juggernauts who have assimilated music for their agendas, with specific reference to the Nazi regime using the music of Beethoven, and the use of Shostakovich in the Soviet Union.

Although much of the talk felt geared toward the promotion of his book, Ross did leave us with some important thoughts outside the history of music. The accessibility of music, and how it becomes accessible, are frequent topics of discussion in circles of musicians, young and old.

For many of us who perform and compose music, the audience is still an entity that can be difficult to communicate with, especially when dealing with aspects of concert formality. What should we expect from performers and audience members at classical concerts, including those of new music? Some performers and composers have taken theatrical approaches, including the use of stage lighting, to decrease formality, while others might perform a Vivaldi concerto wearing a T-shirt and torn jeans. This writer feels that, while these approaches are interesting, perhaps the true answer lies in an approach such as the one Alex Ross takes in his writing style—looking for more ways to make the music itself more accessible to less well-versed audiences.

Because Ross’s writing doesn’t rely on much technical music terminology, his articles are accessible to a much broader readership. At concerts, does it really offend us if someone claps in between the movements of a sonata, symphony, or concerto? Even knowing that there is a “formality” of when and when not to clap can be very stressful for a first-time audience member. Ross’s informal approach to a traditionally formal subject suggests new possibilities for musicians in attracting new audience members.