The Juilliard School has a knack for discovering and booking repeat engagements with young, virtuoso conductors who are on the brink of major international careers, and the upcoming Juilliard Orchestra concert under Stefan Sanderling is no exception. The German-born Sanderling—who is music director of the Florida Orchestra, Toledo Symphony, and (beginning this summer) of the Chautauqua Symphony Orchestra—made his Juilliard Orchestra debut in 2005 with an all-Russian program. He returns this month to lead another Eastern European-themed program on April 17 in Avery Fisher Hall. 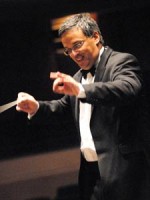 Stefan Sandering returns to Juilliard this month to conduct the Juilliard Orchestra on April 17.

The program showcases Stravinsky’s Firebird (the complete ballet) in the stunning, original 1910 version. The Stravinsky is paired with another work rooted in Russian mythology: Anatoly Liadov’s Kikimora. Subtitled a “fantastic scherzo,” the piece depicts the eponymous monster, who, in the composer’s words, “grows up with a magician in the mountains. From dawn to sunset the magician’s cat regales Kikimora with fantastic tales of ancient times and faraway places, as Kikimora rocks in a cradle made of crystal. It takes her seven years to reach maturity, by which time her head is no larger than a thimble and her body no wider than a strand of straw. Kikimora spins flax from dusk to dawn, with evil intentions for the world.”

There is a special meaning to the juxtaposition of Stravinsky and Liadov, Sanderling explained last month in a phone interview from his home in Florida. The commission for Firebird had originally been offered to Liadov, who, for whatever reason, procrastinated so long that Serge Diaghilev withdrew the commission and began to approach other composers. After Alexander Glazunov declined, and with the deadline looming, Diaghilev must have been desperate enough to turn to a relatively unknown composer, the young Igor Stravinsky, to fulfill the commission on short notice. “We now think of Firebird as Stravinsky’s first great masterpiece, but it’s almost an accident of history that he wrote it at all,” Sanderling mused.

Krysztof Penderecki’s rarely heard Concerto for Viola and Chamber Orchestra (with soloist Wei-Yang Andy Lin) completes the program. An intensely tragic, sparse, and rhapsodic work, it was composed in 1983, in the wake of a brutal Soviet crackdown on the nascent Polish Solidarity movement. As Poland’s communist government imposed martial law to contain the democratic uprising, Sanderling explained, “Penderecki responded with a work that is more of a lament than a protest.”

One might imagine the personal resonance that this has for Sanderling—whose personal and family histories have been affected in myriad and intertwining ways by the Soviet Union. Born in 1964 in the former East Germany, he is the son of the acclaimed conductor Kurt Sanderling. The elder maestro Sanderling, who is now 95, was born to a Jewish family in East Prussia (now Poland). He had been working as a rehearsal pianist at a Berlin opera house when Hitler came to power. Whereas many Jewish artists fled to the West, Kurt Sanderling emigrated to Moscow, where he had an uncle who helped him obtain a visa.

In 1942, Kurt Sanderling became co-conductor of the Leningrad Philharmonic, directing the greatest orchestra in the Soviet Union alongside the legendary Russian conductor Yevgeny Mravinsky. He remained in Leningrad until 1960, when he was dispatched to East Germany to lead the Berlin Symphony Orchestra. He began his first rehearsal by announcing to the orchestra that he was a Jew.

“Being Jewish was made very important to my father, because it determined most of his life,” Stefan Sanderling said in an interview with the St. Petersburg Times [Fla.]. “His life would have been different if he had not been Jewish and had to leave Germany. I think he just wanted to make it clear from the beginning. Here was a Jew who came back to Germany.”

Having grown up in such a prominent musical family (his mother is a double bassist), it seems natural that Stefan Sanderling would gravitate toward music, studying piano, viola, and clarinet as a boy. His path to the podium was an unexpectedly circuitous route. “I never had a strong attraction to conducting, and I’m not entirely convinced that you can study conducting per se, to learn to become a conductor. First you must learn about making music,” he said.

To do so, he enrolled in a musicology program at the university in Halle. However, during the course of his studies, he wrote a controversial paper that analyzed Shostakovich’s Sixth Symphony as a work of protest. Paraphrasing his paper in an interview with the Charlotte Observer, Sanderling explained that, whereas a typical symphony opens with a series of ideas that the orchestra then “discusses,” Shostakovich omitted such a movement in this work, whose three movements are titled Largo, Allegro, and Presto. “In a state and a country and a society where discussion doesn’t exist anymore, and where only one way is allowed, there is no need for the first movement of a symphony. So Shostakovich left it out.”

In the closed culture of Eastern Bloc academia, an analysis such as this was strictly forbidden, and Sanderling was expelled from the program, ending any chances for a future career in academia. He then turned to conducting because “there weren’t any other options left.”

Kurt Masur, then director of the Leipzig Gewandhaus Orchestra, arranged for Sanderling to be accepted at that city’s conservatory to study piano, composition, and conducting. And the rest is history: after two years in Leipzig, Sanderling won a conducting competition that led to opportunities to study and conduct at a summer festival in California, where he remained for two years. “Compared to the gray of Halle, you can imagine what an impression Hollywood made,” he remarked.

Having found his way to the West, Sanderling imagined that he was through with East Germany for good. But he could not have imagined the fall of the Berlin Wall, which led to a vacuum when many East German orchestras were looking for fresh faces. In 1990, when an offer came to be music director in Potsdam (near Berlin), Sanderling accepted, launching what has become a fast-paced, international career, with appointments and guest conducting appearances throughout Europe and America.

Asked about his experience conducting at Juilliard in 2005, Sanderling recalled: “It was clear that everyone enjoys music very much—but this does not always mean that everyone enjoys playing in an orchestra.” Yet Sanderling is hailed for his charisma and has shown time and again his ability to bring an orchestra to a higher artistic plane. And if the compelling artistry of Sanderling’s Juilliard Orchestra concert in 2005 is any indication, the Juilliard community has an extraordinary musical event to look forward to later this month.