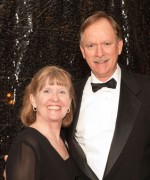 Martha Sterner and Scott Holden aren’t just a Juilliard staff couple; they’re also Juilliard parents: their older daughter, Julia, studied voice in Pre-College. Martha, who was born and raised in Flint, Mich., attended Westminster Choir College and received her bachelor’s degree from Eastern Michigan University, where she majored in vocal performance and minored in theater arts. Scott was born in Washington, D.C., and moved to San Antonio, Tex., when he was 5. He received a bachelor’s degree in history and geography from the University of Texas at Austin and also completed coursework there for a master’s in physical geography. The two met at church, and before long they were dating; they got married in 1987. Both heard about their Juilliard jobs from their close friend the late Betty Brummett, who was the Juilliard registrar until her retirement in 2008. Scott had been a listings and distribution manager (and fact-checker and de facto I.T. person) for American Showcase, a multivolume sourcebook for photographers and illustrators, before starting at Juilliard in 1994. Martha was the assistant registrar at the Manhattan School of Music before coming to Juilliard as the associate registrar in 1998. She started in her current job in 2001.

What is one of your favorite Juilliard memories?
Scott: The Rolling Stones introduction of their 2005 tour on the plaza: watching them playing on the President’s Balcony and seeing Mick Jagger on the loading dock.
Martha: Julia’s Pre-College recital.

What are the best and worst things about working in the same place?
Martha: The drive in to work.
Scott: No bad, all good; great synergy especially while raising children.

Was there anything that surprised you when you became Juilliard parents?
Martha: How supportive the Pre-College Office and the Vocal Arts Department were of Julia.
Scott: How intensive Pre-College program is.

What advice would you give now to a parent whose child was starting to study at Juilliard?
Martha: Support them but let them figure things out for themselves. Always listen, but don’t offer advice unless asked.

What job at Juilliard would you like to try out for a day?
Martha: I’d like to work in the costume or prop department. In my early years both as an apprentice for an equity company and in college I did both and I loved it.
Scott: Something in Production. I am always astounded at the quality and amount of work that goes into the drama and opera sets and staging.

What is the strangest or most memorable job you’ve ever had and what made it so?
Scott: I was a professional map colorer working on a resource map of south Texas for a year at the Bureau of Economic Geology, which is part of the Texas Geological Survey.
Martha: The strangest job was designing telephone systems for large offices. I did the last system just before Julia was born, and the tech guys were afraid they would have to take me to the hospital. They didn’t, but she was born two days later. The most memorable job was working for eight months as a cruise-ship entertainer in the Hawaiian Islands.

What pursuits are you passionate about?
Scott: Getting our daughters, Joanna and Julia, into and out of college and into a career.

What was the best vacation you’ve had?
Scott: The best recent vacation was two years ago when we did our annual trip to Texas to take Julia back to Rice University. My sister joined us, so she and I got to relive our San Antonio past and show the city to Martha and Joanna.
Martha: Well, our vacation two summers ago to Texas was great, but our trip to Northport, Mich., just north of Traverse City, was not only a family wedding, but a family reunion. We all went swimming in Lake Michigan and went to the Great Bear Sand Dunes.

What book are you reading right now, or what CD are you listening to?
Scott: I’m listening to Dark Hope, [Juilliard alumna] Renée Fleming’s recent pop-rock album. Some of the songs have social justice themes, and her voice is beautiful. I’m reading The Jesus Dynasty, an account of the historical Jesus by James Tabor. It gives the factual basis of the mythology surrounding Jesus and the chronology of his life and the rise of the new religion of Christianity.
Martha: Over the Christmas break I read The Help by Kathryn Stockett and The Wind-up Bird Chronicle by Haruki Murakami. I love listening to WQXR and Prairie Home Companion on WNPR.

How do you balance your job and your artistic endeavors?
Scott: I enjoy listening to and attending musical performances of many types. I haven’t played saxophone since high school although I always threaten to take it up again.
Martha: I still sing in church choir and sometimes sing in the church’s cabaret fund-raiser.

What might people be surprised to know about you?
Scott: I’ve been a chaperone on six mission trips with our Presbyterian church, working on home repair for the poor or elderly. I’ve gone to Puerto Rico, Canada (including the First Nations territory), Maine, Michigan, and West Virginia.
Martha: One thing is that I was a soccer coach for my daughter Joanna’s rec soccer team, and we won the division. Another is that I had a very brief Broadway career. I’d been in an Off-Off Broadway show about the life of Victoria Woodhull, and I was the only female member of the cast to continue with the show when it went to Broadway. It was in previews for three weeks at the Martin Beck Theater, but it closed after opening night.