In 2005, while on vacation in Antigua, Guatemala, the nuns who graciously hosted my family directed me to an organization called Asociación Obras Sociales del Santo Hermano Pedro, which has a live-in facility for 250 people with disabilities such as cerebral palsy. I was fortunate to be able to return a year later to volunteer in the children’s ward, and the inspiration I came away with fueled my vision to return yet again with a group of musicians. The nurses there are aided in their mission by international guests from all walks of life, some of whom just want to help and some of whom offer a specialized service like medical knowledge or, in our case, music and dance. We were funded in part by a Juilliard Summer Grant, and spent a little more than a week at the facility in May. 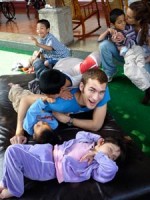 Ain’t No Mountain High Enough to Stop Student Arts Ambassadors in Botswana
In Detroit, Reinforcing the Power of the Arts

Our eclectic group included violinist Caeli Smith, violist Catie Longhi, classical percussionist Ian Sullivan, flutist Matt Wright, and bassoonist Midori Samson; our goal for the trip was to introduce classical music as a potentially healing form of recreation and play. We felt fortunate to have the opportunity to temporarily shed our quest for perfection and virtuosity in order to communicate with people, as Catie put it, “on the most basic level.”

The warmth and charming authenticity of Antigua is embodied in the bright colors of the traditional clothing, the painted houses lined up along uneven cobblestone streets, and, most prominently, by the sweetness of the Guatemalan people. Yet the town is in a valley circled by volcanoes and lush, mystical forests into which it is unwise to travel without a guide. There is no question that Guatemala is in many ways an unstable and perilous country, but amid the Antiguans’ unfailing generosity, we felt safe.

It seems ironic that in a culture of such generosity of spirit, there is a lack of proper care given to people with mental and physical disabilities, a situation that is exacerbated by limited medical education and, inevitably, a lack of resources. There were too few nurses at the facility—and they had too much to do—to spend the proper time feeding, changing, and giving medicine to each child, let alone playing with them. Outside volunteers like us come frequently to the site to fulfill the “play” portion of the children’s lives, although even that puts the nurses under the constant stress of communicating with visitors who often do not speak Spanish. It’s certainly not the nurses’ fault that they do not have time to give outside volunteers any sort of guidelines, and it’s little wonder that they can be resistant to the wealth of medical advice foreign groups share with them! We were fortunate, however, to be guided by a couple of volunteers who have moved to Antigua for the purpose of caring for these children and who had gained the trust and support of the nurses.

While many of the children are orphans or have been abandoned by their families in part because of their disabilities, one autistic and partially blind boy with cerebral palsy, Denis, is lucky enough to have his mother visit him once a week. When we were there, she came with a friend and carrying her littlest son. We had already determined that Denis was our “little dancer” since he had responded to a Mozart quartet early in the week by moving his limbs back and forth to the beat, so we gave his mother a special performance. She had never heard anything like it and promptly expressed to me her appreciation for music, saying it was a lovely thing for the children and that it brought joy to her heart.

Our first day as volunteers in the children’s ward happened to be the last day of a group of students from St. John’s University in New York. Their expertise is speech development and swallowing. We learned from them that the best thing for the speech development of children with cerebral palsy is to repeat sounds they hear. And we—and the nurses—also learned from them that throat muscles and the ability to swallow develop better if children are upright. So, when the nurses asked us to help spoon-feed or bottle-feed some of the children, we made sure to do it properly. Previously these children, who are on a liquid diet, had been fed lying down because it is much faster. Unfortunately it also had the effect of making the children more susceptible to congestion, lung problems, and otherwise preventable trips to the emergency room.

Call it serendipity or divine intervention that we crossed paths with the group from St. John’s, for it turns out that their next annual trip to Antigua will coincide with ours, which is scheduled to take place after commencement. We are planning to collaborate with them in advance so that as we work to stimulate the children’s communication skills and coordination through music and movement, we can also reinforce the proper feeding methods and language development.

In addition to this new collaboration, we will continue to work with the fellow volunteers who live in Antigua, as they are the ones who best know the children as individuals. With their help, our goal is to form a group of performing artists who will visit regularly. And we hope that will be a catalyst for the facility to seek music and the arts as a permanent enhancement to its program.