“What keeps me going is all those damn notes in my head.” So said Elliott Carter about the secret to his longevity in a recent interview with The Journal at his Greenwich Village home. The revered American composer, who is three years into his second century, still composes two to four hours every day and thus remains as prolific as ever, having already completed almost 20 new works since turning 100. Among these new pieces are five song cycles, including Three Explorations (2010), which Axiom will perform on December 12. Conducted by music director Jeffrey Milarsky, this performance marks the work’s world premiere. 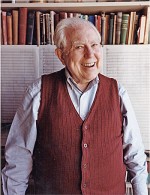 “All those damn notes in my head” keep composer Elliott Carter going. Axiom gives his Three Explorations its world premiere at Juilliard on December 12, the day after his 103rd birthday.

Scored for solo baritone, winds, and brass, Three Explorations is based on poet T.S. Eliot’s Four Quartets. Carter explained that he has long been attracted to the expressive nature of Eliot’s late poetry. “I’ve known these poems for a very long time, but oddly enough, I talked the choices over with a man who lives upstairs,” he said, referring to his neighbor Murray Lerner, the Academy Award-winning film producer (From Mao to Mozart: Isaac Stern in China, 1981), who studied Eliot’s poetry while he was pursuing his Ph.D. at Harvard. Carter continued, Lerner “pointed out different parts of these poems that he liked, and I chose some of the ones that he particularly emphasized. I think they are all very beautiful indeed.”

Carter’s enduring interest in early music was another influence on Three Explorations. He said, “When I was young, my generation was one of the first to profit by the great efforts that musicologists made in discovering old music. When I was studying, I was also interested in music by all sorts of early composers. In fact, it was a very important part of my life.” For Three Explorations specifically, Carter was drawn to the music of Heinrich Schütz, who was a precursor to Johann Sebastian Bach. What impressed Carter most, he said, were Schütz’s “pieces for bass and brass instruments, which have remained in my head ever since. That is one of the reasons this piece [Three Explorations] is orchestrated the way it is, carrying on the idea Schütz had—the solemn and serious point of view. This piece and the text have that side, and I thought it would be interesting to set it with the same quality of the Schütz pieces.”

Three Explorations will feature bass Evan Hughes, a member of the Lindemann Young Artist Development Program at the Metropolitan Opera and no stranger to Carter’s music; in the 2009-10 season, he performed Carter’s Syringa with James Levine and the Met Chamber Ensemble, and, with Southwest Chamber Music, sang in the U.S. and Asian premieres of On Conversing With Paradise, in Los Angeles and Hanoi, Vietnam.

In a recent e-mail to The Journal, Hughes explained that these, and other contemporary works, “demanded everything from me and improved my musicianship and sense of artistic adventure. I took to this music—to its challenges, its details, and to the rush of its execution.” About the upcoming concert with Axiom, he said, “It is the greatest honor of my career to premiere a work of a living legend at this stage of his life as composer and person. The Four Quartets are musically motivated texts themselves, and it is very interesting to study the gestures Carter uses to make music out of them. There is a vast amount of mystery and profundity both in the poems themselves and in Carter’s musical realization of them.”

Also on the program will be Milton Babbitt’s All Set (1957) for small jazz ensemble and Pierre Boulez’s Sur Incises (1996/1998) for three pianos, three harps, and three percussionists. These works are fitting companions to Carter’s, especially considering his friendships with both composers. “I’ve always liked Milton Babbitt’s music very much.” Carter said. “A fascinating composer—and a wonderful, amusing, and fascinating man. I was very fond of him. I miss him a good deal [Babbitt passed away in January 2011]. And Boulez has been a friend of mine for God knows how many years—it must be 30 or 40,” he reminisced. “He’s always been very good to me and always played and conducted a lot of my music. He’s a wonderful conductor and wonderful composer.”

The Axiom concert takes place the day after Carter’s birthday, when he will turn 103. In addition to celebrating at the Juilliard performance, he will be honored at a special birthday concert on December 8 at the Kaufman Concert Hall at the 92nd Street Y. Organized and performed by artists who are both his friends and champions of his music, such as faculty members Fred Sherry (cello) and Charles Neidich (clarinet), this concert will also feature several world and U. S. premieres. Carter gleefully and coyly added, “My birthday is a Sunday, I’ll celebrate it [at a private party] the next Sunday, and the third Sunday is Christmas!”

While Elliott Carter deserves to be admired and celebrated for his compositions alone, it is also his long life and lasting wit that intrigue audiences and performers alike. He himself has recognized an increasing interest in his works. He joked, “After all, you don’t live to be 103 that often.”