Reflections on a Rich Life

His résumé is studded with a who’s-who of the folk music movement. He’s conducted, arranged for, and played on dozens of albums. And while 89-year-old Robert DeCormier (B.S. ’48, M.S. ’49, voice) officially retired last spring from one of his more recent gigs—director of Vermont’s Counterpoint Singers, which he founded in 1996—he’s still busy. He’s scheduled to conduct the fourth annual Sing for Peace Concert in Burlington, Vt., on September 24, and he’s also appearing in two films that will be screened this fall. 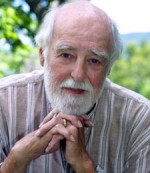 The Robert DeCormier Singers (one of the names the group was known by) was active between 1963 and 1987 and he directed the New York Choral Society for nearly 20 years. He also arranged for Broadway shows and, among others, Harry Belafonte and Peter, Paul, and Mary. One of the two current films is Sing Your Song, a documentary about Belafonte, whom DeCormier met while he was at Juilliard. It will be shown on HBO on October 17 and was also part of the Sundance Film Festival in January. The other, which is in post-production, is Resurrecting Victor Jara, a chronicle of folk music movements around the world.

Ironically, DeCormier’s more than half century of involvement with folk music was fostered by his stint in the military. Born in Poughkeepsie, N.Y., he started playing the trumpet when he was 7. After high school, he went to Maine’s Colby College, but soon decided to study music more seriously than he could there, ending up at the University of New Mexico before World War II intervened and he joined the army. After being wounded in Germany, DeCormier was sent to a hospital in Staten Island, where he joined a chorus formed by the C.I.O. (the federation of industrial unions that later merged with the A.F.L.) and “rehearsed between operations,” he recalled in a telephone interview with The Journal. He also met Pete Seeger, who came to a rehearsal one night and sang for the chorus, and who would become one of the most prominent figures in the folk movement.

Although tempted to become a union organizer, DeCormier auditioned at Juilliard, where he studied voice and choral conducting (he’d since given up the trumpet) with Peter Wilhousky (faculty 1937-47) and later Robert Shaw (faculty 1946-50). “Shaw was the hottest thing in choral music in the U.S. at the time,” DeCormier recalled.

“It was like being in heaven to be totally immersed in the musical level you had at Juilliard,” he said. “I loved the fact that I could practice chord progressions in the subway going to school and nobody noticed with all the sound going on.”

In the late 1940s, the progressive movement was strong, even at Juilliard. “There was a smattering of older students like me,” recalled DeCormier, who was 24 at the time, “who had just gotten out of the service and, because of the struggle against fascism that we’d all been through, were politically involved.”

When he wasn’t practicing or protesting, DeCormier hung out in folk circles that included Seeger, Huddie “Lead Belly” Ledbetter, and Woody Guthrie. He and Fred Hellerman, who, with Seeger would later become one of the Weavers, formed a short-lived group called the Neighbors. DeCormier also started working with the Jewish Young Folk Singers, which included a young (if not Jewish) Belafonte, who would later be known as the king of calypso as well as being extremely active in the civil rights movement.

After graduating, DeCormier launched his choral conducting and arranging career in earnest, and before long Belafonte had invited him to work with his backup singers. “I agreed to do it since they weren’t just there to ooh and aah, but also to explore folk music and black music and spirituals,” DeCormier said. Numerous records and tours later, after Belafonte decided to go solo, Columbia Artists asked DeCormier to form his own choral group, which toured and recorded from 1963 to 1987. While he would be best known for his work with spirituals and folk music, when he became the conductor of the New York Choral Society, in 1970, DeCormier recalled, “It was the first time I’d gone back to classical music, which was wonderful.” He was the group’s music director until 1987, and remains its music director emeritus.

Along the way DeCormier also taught music at a progressive New York City high school, and one of his students was Mary Travers, later of Peter, Paul, and Mary. Travers tried to recruit her former teacher in 1960, but he didn’t have time. When the trio re-formed in 1989, however, he started arranging for them, continuing until Travers’s death, in 2009. “I’ve had a rich life,” DeCormier said as he turned from his “retirement” concert to overseeing its release as a recording this past summer. “I hope it continues.”