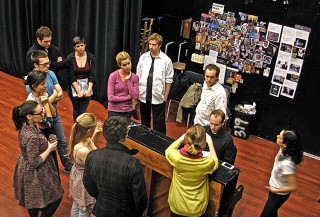 Squeezing in a rehearsal for A Little Night Music, a student-initiated production, with choreographer Gillian Abbott (in yellow) and music director Evan Fein (at the piano).

Juilliard is stuffed full of talent—why not put on a musical? One big obstacle, as fourth-year actor Claire Karpen has discovered, is logistics. “The hardest thing is scheduling,” she recently told The Journal. But under her direction, a dedicated crew of about 20 actors, musicians, and dancers has persevered, pulling a show together on Sunday nights over the last five months. On March 25, they’ll present the result: Stephen Sondheim’s A Little Night Music.

“Every year—somehow—students persist and get projects like this going, and they are real examples of artistic entrepreneurship,” said Ara Guzelimian, provost and dean. “Most creative projects have at their core the unstoppable pursuit of an artistic dream, and Claire has that in abundance. Increasingly in the arts we can’t simply wait for opportunities, we’ve got to create them. Carving out the time within the intensity of a Juilliard student’s life and getting people together is the act of a real impresario, a real producer.” He added that “seeing this sort of cross-divisional work initiated by students realizes a dream for President Polisi and me. It encourages us to think about ways in which the School can serve as a catalyst for more student-initiated artistic collaborations.”

President Joseph W. Polisi told The Journal that A Little Night Music and other student-initiated productions are examples of “young artists thinking outside of the box and coordinating a series of moving parts to develop a program that wouldn’t have existed without their initiative. That’s a series of skill sets I hope will flourish at Juilliard in the future.” An added bonus in these projects is the enormous value that’s gained when artists “look at a project with all its parameters, including logistics, personnel, and budget,” he said. “The fact that this one involves all three arts is great—it’s what Juilliard is about.”

In their final year, drama students have the option of designing an independent project. James Gregg, the Drama Division’s schedule and production coordinator, underscores the optional aspect—“it’s completely driven by the students,” he told The Journal. While there have been about 50 such projects (including two this year) since Gregg began overseeing them, in 2002, this is one of the biggest. “To accomplish something of this magnitude really takes special drive and passion,” he said.

While the projects are done from beginning to end by students, Gregg and the division act as a resource, starting with providing a handbook filled with questions and suggestions to help them “travel the road to bring their vision to light,” Gregg said. The questions range from the philosophical to the practical, from Why this work? and Why now? to If you want lights—or costumes—how are you going to pay for them?

For Karpen, the answer to “why this work” was fairly straightforward. “It felt like it would take advantage of our school’s resources and advantages the best—and the size also felt right. It’s big but doable. Plus I love the show and I love Sondheim,” she said. In September, she asked composition D.M.A. candidate Evan Fein if he knew of anyone who would be interested in being the music director, and he volunteered. A music theater veteran (he conducted musicals in high school and college and has had a few stints on stage), Fein also agreed that A Little Night Music would be a great fit for Juilliard. “It’s an ensemble piece; it’s intimate in character, so we don’t have to choreograph a million dance numbers; and there aren’t a lot of large choral numbers. That makes it easy to rehearse in pieces—there are a lot of solos, duets, and trios.”

The rehearsing in pieces aspect was key due to the aforementioned time and space constraints. Fein was, frankly, surprised that “there were so many people who were willing to take their free time and do anything, let alone something as ambitious as a musical. Time is precious at Juilliard. I was astounded at how many people turned up for the audition. There were twice as many as we had roles,” he said.

Auditions were something of a novelty for the drama students as the rest of their productions are cast by the administration—but Karpen thought it would be “fun for people to figure out how to audition for a musical and that it would be a relatively safe way for them to start exercising that skill again.”

In addition to Karpen and Fein, the company consists of choreographer Gillian Abbott (a third-year dance student), five vocal arts students, 11 drama students, a pianist, a violinist, a clarinetist, and a harpist. “One of my favorite parts has been all of us in a room together figuring things out,” Karpen said. “We’re learning so much from each other. Hearing Evan talk about a piece of music and how that can translate into actor language—it’s exciting to hear how related they are. His understanding helps inform what’s happening in the scene. It’s the same with dance and storytelling through movement and seeing how Gillian hears the music and the story and translates into dance. We’re all after the same things. There are so many people here who you can meet who can be lifetime artistic collaborators. It’s sad to think you can walk the halls with them but never have the chance to work with them.”

Fein agreed. “It’s so much fun to be together on Sunday nights and play fun music,” he said. “It takes serious talent to do something like this, but it’s fun in a way that a lot of what we do isn’t. We’ve been having a blast.”