Survival in a Perilous Garden

On September 11, 2001, an engineer from Hyderabad, India, by way of Paramus, had a sudden craving for coffee and walked down the stairs and out of the north tower of the World Trade Center to get a cup. For that reason, he was not in the building when the first plane hit. At almost the same time in New Jersey, I was late for work at the Rutgers Writing Program, and did not stop to watch CNN when my housemate pointed to the smoking hole in the building. I drove to work thinking, “That was a bad bit of flying.” But once I got to Rutgers, I spent the next several hours fielding phone calls from our instructors who lived in Brooklyn or Lower Manhattan. The ones in Brooklyn said, “We’re trapped here.” The ones in Manhattan said, “The police won’t let us leave. The smoke is coming through the windows.” They inhaled a mix of concrete, jet fuel, and charred human flesh. In the ensuing years, we would realize that the vaporized concrete in that hellish smoke had hardened in the lungs of the first responders, making every breath a death sentence. 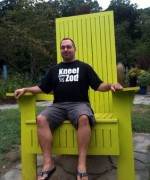 Last May, I attended the wedding of that Paramus engineer’s daughter, Fatima, my dear friend from college. The wedding was held in a walled garden in Monterey, Calif., and everyone was beautiful. Upon my arrival, the engineer, a quiet and formal man, greeted me, saying, “What a pleasure it is to see you here.” I did not tell him that to me he stood out like a figure cut from an old photograph and pasted into this scene of roses and layer cake. In my mind, he is still the man who escaped the World Trade Center because of a random need for coffee. It was like a science fiction film in which a character creates an alternate history by stepping on a butterfly in the past. I shook his hand and congratulated him, but part of me was a tiny bit astonished that this joyful moment had escaped disaster. My heart was filled with an overwhelming gratitude that ignited the air like flames from a dead skyscraper. Of course, I did not say this at the wedding.

Americans are very bad at death. As immigrants settle here, the old ways of mourning—the torn clothes, the shaved head, women keening in front of a coffin—evaporate in the suburbs. Death becomes an embarrassing relative from the old country who can’t speak the language or find a respectable job. Death drives a rusty car and can’t receive text messages. Eventually the invitations to Thanksgiving cease, and the family wonders what happened to that queer old guy. Those who mention him get funny looks from the children, who don’t remember this odd relation. On September 11, 2001, everyone remembered. As refugees covered in gray ash made their way uptown or across the Brooklyn Bridge, a sense of mortality descended on the city. As the odd American who, for reasons of my own, remembers death well, I felt a dimensional shift, as millions of people joined me, suddenly, in a vast space of horror and loss. The Spanish poet Federico García Lorca, in his essay “Theory and Play of the Duende,” tells us that the duende, the daimon of art, appears only in this space. It is the knowledge of mortality that summons the duende from the earth to attend the making of art. Otherwise, there is only technique. The true artist creates in sight of the burning tower, knowing that some—but not everyone—will emerge, perhaps years later, in a perilous garden in sight of the sea.

Salvaging the Wreck of History
Obama, Year 1: Suiting Up