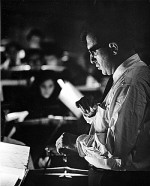 Luciano Beri conducting a rehearsal of his Passagio, which received its American premiere at Juilliard in 1967.

January 30, the Extension Department (predecessor to the Evening Division) opened for classes.