Robert Vernon, the principal violist in the Cleveland Orchestra and head of the viola department at the Cleveland Institute of Music, is joining the Juilliard viola faculty beginning in the 2008-09 school year. The appointment was announced last month by Juilliard’s President Joseph W. Polisi. 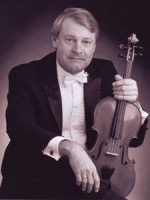 “The Juilliard School is indeed honored to welcome the distinguished violist and pedagogue, Robert Vernon, to our faculty,” the president said. “His exceptional accomplishments as a performer in solo, chamber, and orchestral settings, as well as his groundbreaking work in viola pedagogy, will provide an extraordinary opportunity for future viola students at our school to benefit from his considerable expertise and vision.”

Mr. Vernon is an alumnus of Juilliard, where he studied with Ivan Galamian, Sally Thomas, and Walter Trampler.

“Juilliard gave me the opportunity to fulfill my professional goals and musical dreams,” Mr. Vernon said. “The instruction that I received at Juilliard had a profound impact on my early career and I hope that in coming home to the School I will be able to have a similar impact on a younger generation of musicians.”

A native of Toronto, Mr. Vernon has appeared as a soloist with the Cleveland Orchestra in more than 150 concerts, both in the ensemble’s hometown and on tour in the U.S., Canada, and Europe. He has performed at most of this country’s major chamber music festivals, including Aspen, Blossom, La Jolla, Marlboro, Ravinia, Round Top, Sarasota, Tanglewood, and Yellow Barn.

As a soloist, he has recorded Berlioz’s Harold in Italy, Mozart’s Sinfonia Concertante, and Richard Strauss’s Don Quixote. In November 2000, he recorded the Schoenfield Viola Concerto with the Berlin Radio Orchestra, a work commissioned in 1998 by the Musical Arts Association for Mr. Vernon and the Cleveland Orchestra. Mr. Vernon’s solo and chamber music recordings appear on Telarc, Innova, and Decca/London. He is featured on a CD of orchestral excerpts with spoken commentary, a study tool for young violists, on the Orchestra Pro Series for Summit Records. His book on orchestral excerpts for viola, The Essential Orchestral Excerpts for Viola: The Keys to Winning an Audition, has just been completed.

Mr. Vernon joined the faculty of the Cleveland Institute in 1976 and has served as head of its viola department since then. (He will continue in that position while teaching at Juilliard.) His former students hold positions as chamber musicians, teachers, and as players in more than 50 orchestras, including Boston, Cleveland, Philadelphia, Chicago, Los Angeles, Minnesota, St. Louis, Houston, Atlanta, Baltimore, Detroit, Montreal, and Toronto. He is also a member of the teaching faculties of Kent/Blossom, the National Orchestral Institute in Maryland, and the New World Symphony in Miami, and has given lectures and master classes in Europe, Canada, South America, and Asia, as well as at some of the leading North American schools and conservatories, including Juilliard, Curtis, Manhattan School of Music, Indiana University School of Music, and the Royal Conservatory of Music in Toronto.