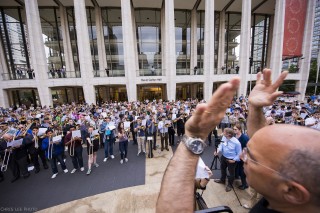 The 45th annual International Trombone Festival—held at Juilliard this year for the first time—began with a bang on June 8 as many of the assembled bones attempted to break the world’s record for the largest trombone ensemble. Some 384 players (most, but not all, of whom were attending the conference) trooped out to the fountain on the Lincoln Center plaza to play Bernstein’s “One Hand, One Heart” from West Side Story and the Pilgrim’s Chorus from Wagner’s Tannhäuser. Faculty member Joseph Alessi, the president of the International Trombone Association, conducted. When the songs were over, the musicians decamped (perhaps more quickly than they would have if it hadn’t started raining) for the official opening ceremony, in Paul Hall, to be followed by four overflowing days of concerts, competitions, and conversations, attended by between 500 and 600 people, Alessi said. Incidentally, the officialness of the record-breaking hasn’t been confirmed yet; the previous record, set in 2013 at Washington Nationals Park, was for 368 musicians playing “Seventy-Six Trombones” in conjunction with Arena Stage’s production of The Music Man.

Some 371 trombonists braved the rain to attempt to break a record.

Among the highlights of the festival was a joint recital called The Women of Juilliard featuring Abbie Conant (MM ’79, trombone), Natalie Mannix (MM ’97, trombone), and Vanessa Fralick (’10, trombone).