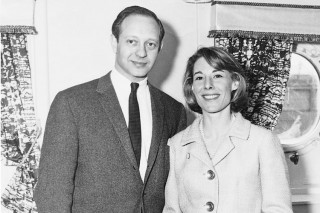 Nearly 50 years after she and Henry Guettel were married, Mary Rodgers Guettel, Juilliard’s chairwoman emeritus, still had an irrepressible twinkle in her eye when she talked about her husband. Here the couple poses for a 1963 snapshot.

Juilliard lost a true friend when renowned theater producer Henry Guettel died on October 7. The beloved husband of Juilliard chairwoman emeritus Mary Rodgers Guettel, he was a devoted benefactor of the School and a regular and lively presence here over the years. A former vice president at 20th Century Fox and Columbia Pictures, Guettel also headed the Theater Development Fund for a decade starting in 1982. He was born in Kansas City, Mo., on January 8, 1928, and died of pneumonia at age 85 in Southampton, N.Y. In addition to Mary, he is also survived by his sons Adam and Alec, three stepchildren, six grandchildren, and countless friends. He will be missed.