Longtime Drama faculty member Jaye Miller Dougherty died on December 28 at age 63 after a four-year battle with ovarian cancer. She was at home surrounded by her husband, Steve, and other family members. 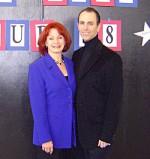 Jaye Miller Dougherty and her husband, Steve, in 2005 at the Juilliard Star Ball, which she created.

Born on January 30, 1950, Dougherty studied dance (ballet and Graham technique), and she received her bachelor’s in theater arts from Penn State in 1971. Her professional theater and dance experience included assisting Tommy Tune in the Broadway production of Nine and Michael Bennett on Ballroom and Dreamgirls. She also organized the Third Avenue Street Fair and started her own calligraphy business (she was known for celebrating the special events of her students, friends, and colleagues with beautifully penned cards).

Dougherty also started studying Alexander Technique, and in the mid-1980s began the training to become certified to teach it. That experience led her to Juilliard, where she was hired in 1992 to teach Alexander to first-year students.

Over the years, Dougherty’s influence and skills expanded in the Drama Division and throughout the Juilliard community. She taught Alexander classes for the playwrighting fellows and some music students, taught first-year Colloquium, and became involved in the Mentoring program. And she regularly reconnected with many of her former students.

Meanwhile, Dougherty had also taken up ballroom dancing, eventually becoming an award-winning competitor in the field. In 1994, Michael Kahn, then the director of the Drama Division, asked her to teach ballroom dancing to the first-year students. She collaborated with her friend and fellow faculty member Darryl Quinton, and eventually her husband, Steve, a champion ballroom dancer. And somehow, colleagues said, everybody learned to dance, even those who thought they had two left feet—and even though no one could figure out how she got the students to accomplish so much in so little time.

Before long, Dougherty created Juilliard’s own ballroom competition, which has become a beloved first-year tradition. Called the Juilliard Star Ball, it was modeled on professional competitions. Students made their own costumes adhering to regulations and choreographed routines. The room was fully decked out and there was a professional master of ceremonies and professional judges (often Steve was one of the judges).

In 2008, Dougherty told The Journal about some of the benefits of ballroom dancing for actors, including the discipline of competition and “things like team spirit and style and loyalty and grace and graciousness and muscle memory.” The article noted that “the goal is not for the students to become dancers, but to become comfortable in their bodies, to learn four or five basic steps of each dance and then ‘let loose, which is what actors do’.”

A quote from Fred Astaire that she regularly gave her classes encapsulated Dougherty’s own philosophy: “Do it big. Do it right. And do it with style!”