On a sultry summer evening when most Juilliard employees were heading home after a long day’s toil, a small group of us, dedicated and mildly athletic, shed our work attire for the blue and gold jerseys of Juilliard’s only official sporting arm: the softball team. 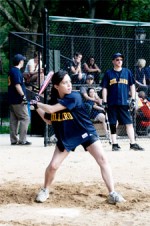 Amanita Pleasant-Heird, director of special events, gets ready for the pitch. Teammate Rob Ross (at right, in sunglasses), Pre-College administrative director for performance activities, looks on.

For an “extracurricular” activity, the expectation of success is exceedingly high. On game days, the team reports to the Rose Building gym at 6 a.m. for stretching, calisthenics, and weight training at the insistence of the team’s manager, James Gregg (schedule and production coordinator for the Drama Division). Then we run down 22 flights of stairs to the Juilliard Café for a breakfast of raw eggs and protein shakes. We are sequestered in the I.T. Office during our lunch hours to study video and scouting reports of the opposing team, and, with special permission from the dean, we are released from our work duties at 4 p.m. to meditate and mentally prepare before we go into combat. It is an intense routine, and I’m fairly certain that Coach Gregg models it after the Drama Division’s daily schedule.

We approach every game with a collective focus and desire to embarrass our rivals, and the action begins with a chant meant to fill our opponents with fear: “We’ve got music, dance, and drama/We’re gonna send you home to mama!” And with this battle cry, the game commences.

There is a considerable amount of pressure on our team and its players. After all, we represent The Juilliard School, an internationally renowned arts education institution synonymous with excellence. Winning is expected and anything less is unacceptable. This was George Steinbrenner’s philosophy, and President Polisi assumes the role of the Boss as if he were a protégé of the late Yankees owner. He makes sure we know he’s always watching.

In one game this past season, Web and database administrator David Gee attempted to stretch a triple into a home run. He was called safe at home on an extremely close play, but broke a cardinal rule of softball by ignoring the third-base coach, who had signaled him to stop at third. The next morning, he received the dreaded call from Martha Sterner. We all knew what was to follow: a 90-minute meeting with President Polisi about David’s actions on the field. I am constantly in awe of how the president manages to lead the School, write books, travel the world advocating for the arts, and still dedicate 25 to 30 hours each week to Juilliard softball team issues.

At 60 Lincoln Center Plaza, the members of the softball team are, for lack of a better word, heroes. Students stop and stare. Faculty members open doors for us. We get unlimited rides on the Development Department golf cart. Sometimes I feel like we’re stealing the spotlight from the students, but then I rationalize that they have the rest of their lives to be center stage. I accept my celebrity status with humility, but know it is well deserved. This is our time. We are the softball warriors.