When Bradon McDonald won his second challenge on the longtime hit TV show Project Runway, he felt his knees and torso shaking. And then, the 1997 dance alum says, “the words started coming out”—he asked his longtime partner, Josh Winograde (B.M. ’98, M.M. ’00, voice) to marry him. The proposal wasn’t entirely out of the blue. For one thing, that particular challenge was created by actor Jesse Tyler Ferguson, who uses the proceeds of his clothing line Tie the Knot to promote marriage equality. For another, McDonald and Winograde had been together for nearly 20 years—since their Juilliard days. As it happened, a few days after MacDonald proposed, the Supreme Court struck down the Defense of Marriage Act. (The show didn’t air until later in the summer.) Recently McDonald chatted by phone with The Journal about dance, fashion (which he took up after retiring from the Mark Morris Dance Company in 2010), and people’s surprising reaction to his popping the question on prime-time television. 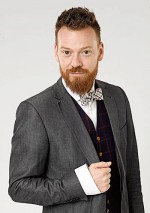 Project Runway has given alum Bradon McDonald a chance to turn some of his dance skills to fashion.

(Photo by Courtesy of Project Runway)

So was your marriage proposal really as spur-of-the-moment as it looked?
Well, we’ve been together since 1994, and we had thought that maybe someday, if it’s actually legal, we’ll think about getting married. But we weren’t really interested in just doing it for ourselves—it was to have federal recognition and for tax purposes and that side of it too. But after I won that challenge, I just couldn’t wait any longer.

How did you meet?
Josh started at Juilliard in ’94 and I started in ’93, and I had seen him around the department and thought he was a dancer, but friends of mine said, no, he’s an actor. And then I talked to him in the cafeteria one day and said, “It’s so funny, I thought you were a dancer but my friends told me you were an actor,” and he said, “well I’m not, I’m an opera singer.” And I had a nervous giggle and got embarrassed and went to clear my tray. So that was our first interaction.

Were you always into fashion?
Even at Juilliard I was collecting fabrics. And one day I was at ABC Home, and there was a beautiful red-background jacquard, and it was $80 a yard—on sale, half price. I had a credit card that my mother had given me for emergency purposes only, and I deemed that this was an emergency, so I put it on her credit card and took it back to my dorm room. That one fabric is the reason I’m a designer. Maybe it would have happened anyway. But that purchase was a symbol of my interest and my desire to pursue that career.

Had you been interested in design before that day?
I originally wanted to go to college for a fine arts/dance double major. But looking into that, I realized it was crazy—it would have taken seven years to fulfill the requirements, and dance was my first priority. I always said to myself that I could go back and do fine arts after the dance career. But even so, it never left my mind, and I was always making things. Eventually fine arts changed from painting, drawing, and sculpture to textile-based work, whether it was quilting or what I call thread painting, where I embroider layers and layers of thread on a fabric, or combining different textiles to make what I considered artwork. I was doing most of that by hand and then Josh bought me a sewing machine because I had all this fabric and nothing to do with it.

And you started making bags?
I realized that dancers and anyone who’s in New York carries a bag and that if I put handles on things I was making, suddenly what had been textile art was functional. And people loved them and starting buying them.

What has surprised you about transition dance to fashion?
The amount of hours that fashion takes. In dance, yes, you have long days, long weeks, but when you leave the rehearsal studio, you can be done for the day. In the fashion industry, it’s overwhelming the amount of things you have to accomplish in a day—and sometimes a day is not 24 hours, it’s 36 hours or more.

What similarities are there?
The amount of drive and focus you need. I learned so much about how to focus and how to push yourself in dance whether you have an injury or have had a 10-hour tech day, but suddenly the curtain’s going up and there’s no waiting for the muse, no magic elixir that’s going to get you through. You have to dig deep inside yourself and produce what’s needed. And that’s the same in fashion. The reality is that you have about 15 minutes to design something, if that, and the rest of the time is spent figuring out how to make it happen, whether it’s making the pattern or working with the pattern maker, or sourcing the fabric and the interfacing and the closures. And if you wait another day to do any of those things, the garment doesn’t get done. So whether you’re feeling particularly creative in that moment doesn’t really matter—you have to dig down and find it or it’s not going to get done.

Was being a Project Runway contestant something you’d been dreaming of?
I’d watched it since first season and loved it. And then after I stopped dancing and was in school at the National Institute of Designer Merchandising in L.A., I thought, I’m just starting in my career, what do I have to lose? And so I applied.

What surprised you about the show?
It’s real! I thought there would be a little extra time to shop or sketch, but the producers have a stopwatch, and they time everything down to the second. You need to get everything you need—hooks, eyes, snaps, tools, fabric—in 30 minutes. And you don’t know exactly what you’re going to make, so you have to get stuff and backup stuff.

Has it changed the way you design?
I don’t procrastinate as much-—going with an initial inspiration and starting to work is really valuable. If that doesn’t work, you can make it work afterward. You get so much more done by just starting rather than overthinking.

What was the reaction to your marriage proposal?
It’s been a real inspiration. I’ve gotten thousands of messages through social media, every single one of which was positive. I was expecting some sort of backlash, but there’s been nothing. There were some people who were adamantly against same-sex marriage before and told me that the episode changed their view. And I’ve gotten hundreds of comments from younger gay couples saying, “I would love to have what you have someday. This is so great to see a strong couple together.”