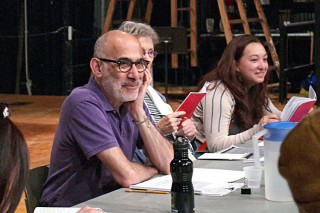 The Juilliard Drama Division’s newest collaborator, Victor Pappas, has always thought of himself as “an actor who directs,” he told The Journal. He was speaking on a September morning before leading a rehearsal for the fourth-year production of Jeffrey Hatcher’s Smash, which opens October 9. “I think the actor is the center of the theater experience,” he said, and “it’s my duty to serve the play and the playwright, and to unlock whatever I can for the actors so they can share their humanity with an audience.” 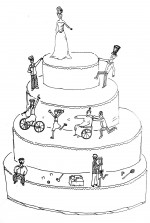 One plotline of Smash is that Sidney (Alex Breaux) is supposed to be marrying Henrietta (Jessica Savage)—a huge wedding cake, here fancifully imagined by one of the actors, Kate McGonigle, is onstage throughout the play.

Adapted from the 1883 George Bernard Shaw novel, An Unsocial Socialist, Smash is set at the twilight of Edwardian England, in 1910. Science and technology are in ascendancy with the birth of electrical power and air travel. The central character is Sidney Trefusis, a millionaire socialist with dreams of bringing a different sort of revolution to Britain’s ruling class, and his conflicting ideas and emotions illustrate the ongoing battle between capitalism and socialism. While working undercover as a laborer at the all-women’s Alton College—where the bulk of the play’s action occurs—Sidney assumes the name Mr. Mengels, a hybrid of his heroes, Karl Marx and Friedrich Engels. Don’t think for a moment, though, that this play is all seriousness: in fact, looking ahead to the remainder of the division’s offerings this year, it may be the most lighthearted of the lot.

Originally commissioned and presented by Carleton College in 1995, this adaptation was developed in the New Voices play reading series at Seattle’s Intiman Theater, where it was by spearheaded by the company’s literary manager and dramaturg, Robert Menna, and Pappas, Intiman’s associate artistic director, who said he’s been a fan of Hatcher’s writing for years. This is Pappas’s third time directing the play, which he led most recently in 2007 in an in-the-round production at N.Y.U.

Pappas’s affection for the text is equaled by his fondness for the play’s 10 meaty roles. “I do love that Sidney [Alex Breaux] is so intelligent that he trips over it sometimes,” Pappas said. “He doesn’t understand at the beginning of the play how much he needs to learn, but by the end, he’s learned a lot. He thinks he can do it all alone, and that he can run a revolution, but he has to learn the hard way that that’s not possible,” he adds. “The wonderful lesson Agatha [Kate McGonigle] ultimately teaches Sidney is that changing from within is about subverting the system rather than attacking it.”

Despite more than a century having passed since the play’s central action took place, Pappas says its themes are very relevant today, noting that the societal imbalance in Smash is similar to ours. “Since the Reagan presidency, we’ve experienced a shifting back toward a pure capitalism. This means the few at the top have the most,” he said. “There’s this anger, this desire to equalize that, which I think all these kids can relate to, at least from what I’m hearing in the room as we talk.”

Pappas also believes that Smash doesn’t get enough productions. “If somebody came to me tomorrow and said, ‘When you’re finished at Juilliard, would you like to do another production of Smash?’ I would probably say yes.”

Though Pappas now calls Seattle home, he was a New Yorker until the opportunity to study acting took him to San Francisco’s American Conservatory Theater. He worked on the West Coast for a number of years before returning to New York, where his character-actor look and demeanor left casting agents and directors impressed yet flummoxed about what to do with him.

At a pivot point in his performing career, in 1982, Pappas was offered a position at the Pacific Conservatory for the Performing Arts in Santa Maria, Calif., where one requirement was that he direct a main-stage show (The Pajama Game). Having never directed a fully realized production, he panicked a bit, but then, he recalled, “I got to first rehearsal, I talked about the play and a few minutes later I thought, I’m really liking this.” The feeling stayed through the production, he said, “and that was it.”

Following Smash, Pappas will return to Seattle to teach a private audition class and, in February, he’ll direct The Importance of Being Earnest for the Seattle Shakespeare Company. But he hopes this is the first of many collaborations at Juilliard. “I would love to come back,” he said. “This environment is extraordinary. Riding the elevator with those young people who are so engaged and ‘up’ about the beginning of a new year is really thrilling.”