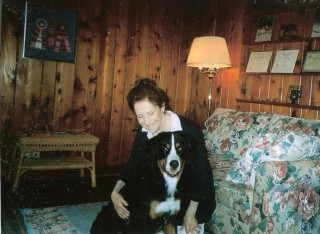 Earlier this year, we put out a call for alums who had a connection with the military to contact us. We’ve been getting a great response (if this applies to you, let us know at journal@juilliard.edu)! One of the alums who contacted us was Marilynn Nudelman Kregal (Diploma ’59, violin). In 1971, Kregal became the principal second violin of the Buffalo Philharmonic, and soon afterward, acted on her lifelong love of animals to found a dog obedience school. After the 9/11 attacks, Kregal was inspired to start training therapy dogs, particularly for post-traumatic stress victims, though they can work with people who’ve suffered through all sorts of hardships. Recently, Stephanie Gatton, Juilliard’s special events manager (and herself the owner of a therapy dog, Marley, who periodically comes to school to help stressed-out students relax—they’ll be here on February 19) exchanged emails with Kregal. They discussed Kregal’s time at Juilliard and her work as a trainer and as a longtime working violinist. Though Kregal retired from the B.P.O. in 2000, she continues to play four or five concerts annually with a chamber group of other musicians from the orchestra.

When Portland, Ore., native Marilynn Kregal arrived at Juilliard in 1955, it was the farthest she’d traveled from home. The summer before she graduated, however, that changed with the Juilliard Orchestra European tour under conductor Jean Morel (faculty 1948-71). “That was a huge thrill,” she remembered, noting that the group “toured six foreign countries and 19 cities, playing 25 concerts to 50,000 people. Reviews along the tour constantly remarked that nowhere in Europe was there a student orchestra, or even a training program, that could equal Juilliard.”

At school, studying under Louis Persinger, Dorothy DeLay, and the Juilliard String Quartet prepared Kregal for the rigors of a professional orchestra life. She recalls DeLay outlining the options for her students: one had “the desire, talent, and physical stamina for a solo career, the reverence for playing the chamber music literature, or [a yearning to be] totally sound-surrounded by the drama of the orchestral literature. The latter struck a note with me, and that’s exactly where I happily found myself,” she recalled.

After graduating, Kregal worked as a musician, and in a manner typical of women of her time, followed the career of her then-husband, Jesse Kregal (’59, percussion), holding symphony positions in Washington, D.C., Toronto, and her native Portland, before settling in Buffalo. Once she was in Buffalo, she started pursuing her passion for animals, breeding 14 Alaskan malamutes and going on the dog-show circuit—including an appearance at the centennial presentation of the Westminster Kennel Club, in 1976, with her dog Chelan.

The turn to therapy dogs—who are trained to provide affection and comfort to people in hospitals, retirement and nursing homes, schools, and disaster areas—was a response to the 9/11 attacks, though Kregal noted that going from the intensity of performing music to dog training and showing had brought her “a lot of stress relief.” She and some colleagues formed a group called Canine Therapy Teams of Western New York, which currently works with outside organizations to certify therapy dog teams (one human, one canine). Dogs are monitored during visits to ensure they’re not becoming too stressed while de-stressing others.

Currently, group members visit a veterans facility where the patients—some who served in Vietnam, others recently returned from Afghanistan, all suffering from post-traumatic stress disorder—respond to the dogs in different ways. “A veteran who may not have spoken or even touched a dog when we first arrive will allow his hand to brush up against a dog who has instinctively chosen him and has been sitting quietly at the veteran’s knees,” Kregal noted. On another visit, a veteran who had developed a nice relationship with her dog, Sascha, lay down on the grass, and Sascha “immediately scooted over to him and cuddled up with him. Another fellow, just wanting to be involved, offered to get my dog her water bowl and thermos, worried that it was a warm day for her,” Kregal recalled. “Sometimes a veteran will not give a dog a glance. Others are wistful when we have to leave.”

In addition to working with veterans, Kregal’s group also deploys in times of crisis, arriving after the search-and-rescue teams have done their work. Often their “patients” aren’t merely the injured, but also the first responders. As Kregal recalls, “we are sharply aware that it’s the workers who sometimes desperately need the dogs.” During a 2006 ice storm that left many Buffalo citizens without heat, power, or shelter, the therapy dogs helped the people working feverishly to rectify the situation, Kregal wrote. “While they were at computer banks with no rest for days, they [had] one hand on the computer and the other petting a dog who was keeping them calm and their blood pressure down!” In February 2009, when Flight 3407 crashed near Buffalo Airport, killing everyone on board, Kregal’s therapy teams offered their services to the families of the victims. In situations like that,” she noted, “the handlers are trained to say nothing and let the dogs do the work. And they did it well.” But the handlers also benefit—she noted that she and her colleagues “frequently say how much better we feel after having been there with our dogs.”