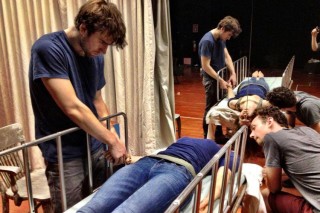 The student production of A Clockwork Orange features first-year Steven Robertson (standing at left) playing Dr. Branom, fourth-year Brittany Vicars (on the bed) who plays all the women’s roles, and third-year Justin Barnes (sitting at right) who plays Dr. Brodsky.

Fourth-year actor Alex Sharp first read A Clockwork Orange, Anthony Burgess’s dystopian novella, at the age of 8. While this 1962 tale of youths who embrace violence for its own sake was hardly written for children, Sharp found himself riveted by Burgess’s “complex, dark, and yet hilarious” story and the language he used to tell it. And so a few years after Sharp arrived at Juilliard, he found himself thinking about a play based on the book—a dream that he’ll realize via a student-initiated production of it that he’s directing. It will be performed on March 23.

“Even though Clockwork was written a long time ago, a lot of the themes are increasingly important,” Sharp told The Journal recently. Among them are “the justice system, choice, the advancement of technology and medicine, people playing God,” he said. “Since I’ve starting working on this project it seems like every third story on my BBC app relates to Clockwork themes.”

Taking on a large-scale independent project might seem a little crazy, Sharp said, admitting that he and his classmates are “under epic amounts of pressure and going through tons of emotional turmoil,” but he found himself “really wanting to collaborate with all the artists in this school,” and found the energy to make that happen. While he hasn’t managed to work with all the artists at Juilliard, Sharp is collaborating with an impressive total of 24 actors, singers, instrumentalists, and dancers—a scheduling feat in and of itself.

By far the most famous dramatization of the book is Stanley Kubrick’s iconic 1971 film version, but Burgess, who died in 1993, wrote a play that was produced in 1990 by the Royal Shakespeare Company with music by U2’s Bono and the Edge. (The production was panned and even Burgess didn’t like it, according to contemporary press reports.)

About a year and a half ago, Sharp and a few other students started work. First they stripped down the “jaunty, sub-operetta feeling” of Burgess’s play and started conceiving of a musical background for it. An important plot element of Clockwork is the main character’s seemingly incongruous love of Beethoven. While Burgess had set lyrics to Beethoven’s music in his play, Sharp and his music director, fourth-year percussionist Brian Shank, decided that they wanted more of a soundscape with lots of Beethoven influences.

Britanny Vicars is the assistant director and plays all the women, while her fellow fourth-year drama student Wallis Currie-Wood has the eye-opening title of “futurist,” a sort of dramaturge figure who studies the past to prognosticate what might happen. “The world is so fragile in terms of resources and political power,” Currie-Wood told The Journal. Her research into how present-day realities might play out is “helping the cast imagine what their roles will be like in 100 years.”

One frequently overlooked message of Burgess’s book, Sharp said, is that there is “potential in everyone to create healthily if they’re not misguided by society.” (The Kubrick movie is darker in part because it’s based on the less hopeful version of the book that Burgess’s publishers insisted on releasing in the United States). Sharp described this as “the potential to turn an ode to destroy into an ode to joy. And making art more accessible is something we need.”

For more information about the Clockwork Orange project, go to gofundme.com/3rr7tg.