Jeffrey Thomas (’81, voice) didn’t intend to become a conductor, though he had been conducting on and off since he was 16, but he hasn’t looked back since he made the switch from singing. Thomas, a tenor, founded the San Francisco-based American Bach Soloists in 1989 with fellow Baroque musicians and eventually became the ensemble’s conductor. The transition from singing wasn’t difficult at all, he recently told Juilliard’s director of foundation and corporate relations, Edward Sien. “The feeling of not having to clear one’s throat or worry about having eaten the wrong food, or not being hydrated enough was a rather welcome relief,” he said. “Singers have to walk a tightrope—so many things can get in the way of perfect vocalism—I was glad to have a bit more leeway in those areas.” Thomas, who grew up in Allentown, Pa., attended Oberlin, the Manhattan School, and Cambridge University in addition to Juilliard. 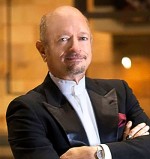 You attended a starry roster of schools. How did they differ?
I found each program and its environs to be very inspirational. Oberlin is a wonderful place to begin in-depth studies of any sort. The combination of its conservatory and college was very appealing as I was pursuing a double major in voice and mathematics. But my primary teacher, Richard Miller, took a sabbatical and I thought I’d take a year off, too. So I headed to the Manhattan School of Music for a semester because my teacher at that time, Ellen Repp, was on its faculty. Then I spent a semester at SUNY Purchase, also because I could continue to work with her. The campus was still being built, so I remember lots of brick and mud. Nevertheless, it was the dawning of a wonderful center for arts education.

Juilliard was very attractive, of course—the pinnacle, in fact—and I thoroughly enjoyed my almost three years in the voice department and at the American Opera Center [the forerunner of Juilliard Opera]. Back then, I never would have imagined that Juilliard would eventually develop a program in early-music performance—how wonderful that is!—but I was still pursuing a more opera-centric career. My studies at Cambridge were brief, but tremendously enriching; I spent a summer studying the poetry of T.S. Eliot, John Keats, and W.B. Yeats. That led to an invitation to stay on as a choral scholar, but I opted for a contract at the San Francisco Opera instead and became one of the first Adler Fellows.

Do you come from a musical family?
Both of my parents were very musically inclined. They sang, together, on local radio shows, and made certain that my older brother and I received lots of music lessons early on. My brother, John, was becoming a virtuoso pianist at the age of 9, so I eventually found my way to the violin, then harpsichord and organ, studying with Alan Birney (D.M.A. ’71, organ). The singing came quite easily to me: I was a tenor and benefitted from all of the instrumental training that I had fortunately received.

What did you learn at Juilliard that has helped shape your career?
The American Opera Center was directed in the late 1970s by Martin Smith (a coach and then the acting director of the center from 1973 to 86), a superb accompanist and coach. His mentorship was invaluable, but so was the experience of working and studying in the heart of Lincoln Center and meeting musicians who would become very meaningful mentors. But I think that the most valuable and somewhat unique aspect of my Juilliard experience was getting to know and work with students in the other divisions: dancers, actors, and musicians shared the common spaces and we learned to greatly appreciate each other’s hard work and artistic goals.

How was the transition from singing to conducting?
I had been a conductor since I was 16 years old, having formed a professional chamber orchestra and choral ensemble in Allentown. While in New York, I met, worked under, and studied with some fine conductors including Richard Westenberg (faculty 1977-89) and Gerre Hancock (faculty 1971-2004), as well as the one who had the most influence on me, John Miner, who was on the conducting staff at City Opera and who taught me so much about this marvelous career.

The event that triggered my return to conducting as an adult was a performance of Bach’s Mass in B Minor in California. I was part of a group of early-music specialists who were frequently engaged by conductors to lend an “authentic” touch to performances of works from the Baroque. Unfortunately, many of those conductors were just as resistant to letting their imported experts help the flow of the performance as they were eager to engage that sort of outside help. So we formed American Bach Soloists, an ensemble that (at first) was intended to function without a conductor. As our repertory grew, the need for my conducting also became apparent, and I found that I couldn’t adequately continue to sing while focusing on all of the other responsibilities of a conductor whose ensemble was embarking on a busy and fairly prolific course of recording.

American Bach Soloists focuses on historically informed performances of Baroque repertoire, but you’re also a strong advocate for contemporary composers. What trends do you foresee in classical music? How might Juilliard students stay ahead of the curve?
With A.B.S., we investigated what we perceived as performance and audience trends for quite a while before realizing that if we stick to what we do best, then the musical experience that we offer will never lose its integrity. It can be tempting to refashion one’s artistic goals based on feedback about such cultural trends. But ultimately that can be unrewarding on both sides of the concert hall.

It’s important to find the aspect of music-making that one does best and to cultivate and polish that until it is undeniably valuable to listeners and patrons. Never reach for too much too soon. The sad truth is that many who are in the position of engaging new talent will make quick decisions based on what they hear first. In other words, wait until your best efforts are truly ready to be heard and until you’re ready to accept and excel at all offers that will come your way. In “the old days” it wasn’t uncommon for a singer to study for years before being heard by anyone, and then emerge as a stunningly prepared and polished performer. There is much merit in that approach.

Audiences will always be drawn to great artistry in any form. Know the background, the cultural significance, and the performance history of the music that you study. Then dig deeper. Ask yourself why a composer wrote a sonata or an aria the way s/he did: Why is this note long? Why is there a melisma here? What is the composer’s language of rhetoric and what was s/he hoping that the audience would learn and feel and understand? Try to figure that out, and then perform the music in a way that reveals what you see on the page to the ears of the listeners who don’t have that music in front of them. Share that privileged glimpse into an artist’s work with them

Juilliard has become more focused on entrepreneurship. Any advice for students looking to navigate the classical music jungle?
Audiences have many choices. It’s not just a matter of “which concert shall we hear tonight?” They choose between a concert and a nice dinner, or a book, or a play, or exercise. So respect their time and interest and give them as many aspects of a complete experience as you can. Educate your audiences. Assume that they’re highly discerning, yet at the same time they rely on you to provide a rich adventure of learning and enjoyment. They want to know more about what you do and how you make your musical choices. Help them understand that at every opportunity. They’ll come back for more.

What do you know now that you didn’t 20 years ago?
How truly lucky I am—how truly lucky any performing artist is—to have the task of relaying to an audience the intentions of a composer or playwright or choreographer. I remember when I prepared to conduct Beethoven’s Ninth Symphony for the first time. I spent at least six months getting ready, memorizing every page of the score, delving into Beethoven’s life and the circumstances that led to the composition of that work. I learned what it meant to him and what it meant to his audiences. At the end of that period, I likened the experience to being able to visit the same museum or gallery every day for six months, sitting in front of the same painting for all of that time, and coming away with an understanding of it that all too few people can afford.

It takes time, but if we are going to be the medium—the performers who will render a work of art, a composition, for an audience who has much less time to get to know it as well—we have been chosen to enjoy a most noble calling and we are obligated, happily obligated, to bring every point of perfection to that process that we can muster.