Paradoxes of Futurism Revealed at Guggenheim

Galloping noisily up the Guggenheim Museum’s ramp, the rambunctious exhibition Italian Futurism 1909-1944: Reconstructing the Universe delivers an unprecedented view of the entire history of the Futurist movement. Unlike some previous Futurist exhibitions, this one isn’t limited to the movement’s famous earlier or “heroic” phase (c. 1910-14) in which artists strove to convey dynamic movement by using fractured, Cubist-influenced constructions. The show begins with great excitement, gathering momentum, then becoming blander and less interesting—with some outstanding exceptions—and ending with a mural that has never before been seen outside of Italy. Featuring more than 360 works by more than 80 artists, architects, designers, photographers, and writers, the exhibition introduces us to many little-known names. 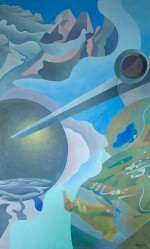 At its start, the Futurist movement consisted of young writers and artists in rebellion against the status quo. Regarding Italy as a nation held back by her historic past, they looked instead to the excitement of new industry and progress. Indeed, Futurist artists anticipated transformative modernist movements such as Dadaism and Surrealism; they wrote manifestos, held evening performances called serate, and went all out to be disruptive. Their intention was to provoke and upset the status quo, or épater le bourgeois. A successful evening, they believed, might elicit the throwing of rotten fruit by the audience, or better still, a call for police intervention.

Dynamism, speed, machinery, and aerodynamics are among the trademark characteristics of the movement. Poet and editor Filippo Marinetti (1876-1944) published the first Futurist manifesto on February 20, 1909, in Paris, on the front page of the newspaper Le Figaro. He wrote, “We say that the world’s magnificence has been enriched by a new beauty; the beauty of speed. A racing car whose hood is adorned with great pipes, like serpents of explosive breath—a roaring car that seems to ride on grapeshot—is more beautiful than the Victory of Samothrace [popularly known as the Winged Victory].”

Marinetti and his colleagues, all young men under the age of 30, vowed to “glorify war—the world’s only hygiene—militarism, patriotism, the destructive gesture of freedom-bringers, beautiful ideas worth dying for, and scorn for women.” Some art historians think that the call for war merely meant rebellion to Marinetti—not the unimaginable war that broke out in 1914, and in which several of the artists were among the some 37.5 million people eventually killed. But others insist that the prospect of a world war thrilled Marinetti. As for his scorn for women, some art historians say he was just attacking traditional bourgeois notions of womanhood. After all, Marinetti (whose wife, Benedetta, was an artist—her work concludes the current show)—commended the intellectually elite women of Paris, whom he said were so different from the more traditional women of Italy.

The movement embraced many paradoxes, but none contaminated it more than its ties to Fascism and Benito Mussolini, Italy’s premier from 1922 to 1943. However, history has taught us that great art does not necessarily arise from liberal or idealistic political movements. Socialist leaders, for example, have often seemed blind to new forms of art. Indeed, just like conservatives, they often prefer art that’s more accessible to the masses. When it began, the new and vibrant Futurism stood against academicism, stale and outmoded ideas, and strove to pave the way—at least artistically—toward a better future.

The early phase of Futurism (and to my mind, still the strongest and most important) is the one that has been primarily collected and shown in the United States. The Museum of Modern Art owns quite a number of spectacular works by early Futurist artists Umberto Boccioni, Gino Severini, Giacamo Balla, and Carlo Carra. Boccioni’s drawings and sculptures occupy the first gallery at the Guggenheim; his theory of motion resembles that of French philosopher Henri Bergson, whose writings strongly influenced him, as did, paradoxically, the more traditional work of Auguste Rodin. The sculptures include the famed Unique Forms of Continuity in Space (1913), a bronze form based on movements of a man; the Development of a Bottle in Space (1912); and Antigraceful (1913), a quasi-comic head of his mother. This last portrait seems to have been inspired by Picasso’s Head of a Woman (1909), but the sculptor consciously tried to avoid Cubist influence. Epitomizing the Futurists’ rejection of traditional beauty, the work also integrates elements of background, such as the building emerging from the woman’s head.

Boccioni was not only a sculptor, but also a painter. His 1910 painting The City Rises, owned by MoMA, has long been one of my personal favorites. The swashbuckling, trumpeting color and dynamic brushstroke reveal new construction that replaces the old and traditional. Horses and working men labor only to be replaced by the city of Milan’s new structures. Interestingly, the composer Furruccio Busoni purchased it in 1912.

Boccioni’s Elasticity features a disjunctive horse and rider moving and swirling in reds, yellow, blues, and greens. Balla’s Street Light radiates rays of artificial light, challenging the moon underneath it. It is reminiscent of the British painter J.M.W. Turner’s Rain, Steam, and Speed: The Great Western Railway (1844), in which new technology defies nature.

As the exhibit consistently emphasizes, Futurism was not just an avant-garde artistic movement, but also a way of life. Indeed, I once read that between 1909 and 1914, Italian children played Futurist as American children played cowboys and Indians. The multimedia show at the Guggenheim includes videos, sound, furniture, ceramics, printed materials, and other material culture. One section features the collaboration between Balla and Diaghilev on stage sets for Stravinsky’s Fireworks. Although that production closed after only one performance, the play of light and music at the Guggenheim illustrates its potential. The painter and composer Luigi Russolo’s exploration of Noise Music can also be heard and seen in the exhibition. And in one section of the exhibit, a Futurist theater shows three archival films about Futurism’s opera d’arte totale or the total work of art (a term better known in German: the Gesamtkunstwerk).

The top tower gallery contains five large canvases that make up the mural Benedetta Cappa Marinetti (Filippo’s wife) painted for the Palermo Post Office in 1933-34. Called Synthesis of Aerial Communications, it celebrates technology and modernity and fits right in with the zeitgeist of the ’30s. This coincided with the beginning of the New Deal era, during  which the United States government commissioned hundreds of wall paintings for public buildings. Unlike New Deal murals, however, which had tremendous variety and vitality, Benedetta’s mural seems strangely sterile and reminds me of the trylon and perisphere designed for the 1939 World’s Fair in New York City. Never exhibited outside of Italy before, the mural does correspond with the “total work of art” concept running throughout Futurism.

This exhibition features work that starts out in a revolutionary way, but that would become far less interesting and powerful during the second phase: the 1920s and ’30s. Nevertheless, it does have exceptional moments even during those years. And exhibitions like this one are an extremely instructive way to put the whole movement into historical perspective.