Longtime Juilliard board member and patron Mary Rodgers Guettel, a composer and author, died on June 26 at the age of 83. Guettel, the daughter of Richard Rodgers (’24, music theory) had been on the Juilliard board since 1992, serving as chair from 1994 to 2001. She is survived by five children; her husband, Henry Guettel, died last year. President Joseph W. Polisi reminisced about Guettel and her legacy of artistic integrity, joy, exceptional support, and belief in Juilliard’s young artists. 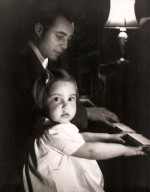 Former board chair Mary Rodgers Guettel was the daughter of one famous composer--alum Richard Rogders, with whom she's pictured--and the mother of another, Adam Guettel, who's best known for the Tony-winning The Light in the Piazza. Her own forays into writing include several novels and the musical Once Upon a Matress, which has been performed regularly since its 1959 debut.

Mary Rodgers Guettel was an amazingly vibrant and unique human being. That’s why it’s difficult for me and so many friends and family members to come to grips with her passing. She was truly a life force whose presence illuminated any room she entered.

I first met Mary and her husband Hank at a dinner party hosted by Bill and Frankie Schuman in the late 1980s. Bill, by this time, was long retired from his former positions as president of Juilliard and then president of Lincoln Center. Dinner parties at the Schumans’ were exceedingly well-planned gatherings, and I’m not talking just about the food. The Schumans knew the cultural world of New York better than any other couple, and they were very careful about putting the correct mix of guests together so that the evening flowed with good conversation and a rather large dollop of gossip.

My wife Elizabeth and I were still neophytes in this process, and we tended to sit back and soak up the sophistication of the experience. There was something very distinctive about how Mary participated in these conversations. Her comments had a tinge of the rhythm, tempo, and language one would experience in a scene out of a Hepburn/Tracy movie: quick repartee, witty retorts, and much laughter, embellished by frequent puffs on a cigarette.

Mary had a bon mot for every occasion. When discussing a less-than-successful result of a donor solicitation, for example, she would respond, “Well, at least he didn’t kick you in the shins.” There were other responses that do not lend themselves to public repetition, but her spicy language always was delivered with good will and a twinkle in her eye. Mary was also quite self-deprecating, especially about her compositions. Such modesty was not justified, because her shows and her individual songs reflected all that was Mary—intelligence, wit, and beauty.

After authorization from the board, I asked Mary in 1994 to be the chairman of Juilliard—in, once again, the Schuman living room. By that time Bill Schuman had passed away and Frankie was acting as an important intermediary in achieving my goal. Hank had just retired as head of the Theater Development Fund, and he and Mary had planned to increase their international travel in the time ahead. I tried to be as persuasive as possible with Mary, referring frequently to all the great things she would do for the School. I must have become lost in my enthusiasm, because I remember Frankie interrupting me and saying, “Joseph, for goodness sake, stop talking. Mary just said yes!”

Mary was chair from 1994 to 2001, and she was a source of great joy to the entire community. By her second year as chair, every time I would introduce her to a Juilliard audience—at a convocation, commencement, etc.—a spontaneous chant of “Mary, Mary, Mary” rang out. That’s charisma.

Mary was invested in all aspects of the School, and saw our wonderful students as her “kids.” She told me early on that she “didn’t do zeros,” which was quasi-code for requesting that other key board members become involved in the financial side of the School. However, she was a tireless and effective fundraiser, especially when we presented our biennial benefit concerts. There were very few people who could—or would—turn down a donation request from Mary. Of course, her personal generosity—with her time, her resources, and so much more—was legendary, and her empathy for all who were in need in the Juilliard community was deeply touching to witness.

In her later years, she was a supportive guardian of the Richard Rodgers legacy, as well as a loving wife, mother, grandmother, and friend to so many of us. During the past two years, it was difficult for her to leave her apartment on Central Park West and she would occasionally call me to say that she couldn’t attend a board meeting but that she sent her love to all. In fact, it was that unconditional love that made us all feel that we were special people in her world—a world that nurtured the performing arts, loved the hustle and bustle of the theater, and supported and embraced the many young artists in dance, drama, and music who knew Mary during her time at the School. What a joyous legacy she has left for us all.