Composer Finds Intent Behind Each Note 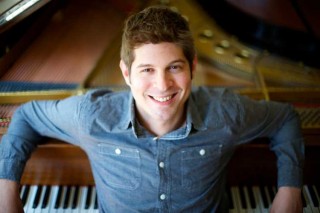 Adam Schoenberg's first orchestral album is slated to come out next year.

At 33, Adam Schoenberg (M.M. ’05, D.M.A.’10, composition) is quickly becoming one of the most admired and widely performed American composers. Embracing lyricism and a cinematic sweep, his music is both engaging and challenging, and has found eager champions and audiences from Atlanta to Louisville to Los Angeles. Next year will see the release of his first solo orchestral album, which includes his American Symphony, by the Kansas City Symphony under the direction of Michael Stern; a recording of his piano music played by Nadia Shpachenko is due out in November.

You traveled a familiar conservatory education path from Oberlin to Juilliard. When did you first know you wanted to pursue composing as a career?

My father [Steven Schoenberg] is a composer, so music was very integral to my upbringing. I began playing piano and improvising at the age of 3. But as a kid, I was a real athlete, and actually the main reason I went to Oberlin was because of the soccer team. When I look back now, I think I was drawn there too because there was a conservatory across the street. I just wasn’t ready to acknowledge at first that music is a true part of who I am. After my freshman year, I realized I had had enough of a general liberal arts education and transferred into the conservatory.

So you began composing quite late?

I didn’t start composing until my sophomore year of college, and I felt from the moment I started I had a lot of ground to make up. When I entered Juilliard, my teacher Robert Beaser was not shy about telling me that. I remember at my first lesson, he said, “You are lucky to be here. We see a lot of talent in you, but you have a lot of work to do.” I had to learn craft. Bob was great for me, and held my hand throughout the process. He dove into my music and asked about the intent behind each note and rhythm—the micro level. After a couple of years, we both felt I needed to study with someone who was more about the overall picture. So I went to work with John Corigliano. He’s much more of a macro level teacher. He’s famous for saying, “Without the structure, the notes are irrelevant.” To this day, they are my greatest mentors.

Two of the works on the orchestral album, Finding Rothko (2006) and Picture Studies (2012), were inspired by specific pieces of visual art. You’ve also composed a number of film scores and your doctoral dissertation was on the film music of Thomas Newman. Could you speak to the connection between the visual and the audible in your work?

It hasn’t necessarily been a conscious decision of mine. I’ve always been drawn to visual art, and one of the great things about being a student at Juilliard was that we had access to so many museums. As a student, there were many days that I would walk out from Lincoln Center and head down to MoMA or across town to the Guggenheim or the Met, so I think I always found inspiration in other art forms. Maybe my attraction to film music is because I love drama and the idea of a narrative that unfolds. At the end of the day, I want to tell a story through my music, even though it can be incredibly abstract.

How did the American Symphony (2011) come about, and what makes it so American?

Three nights after President Obama was elected [in 2008], I heard Copland’s Third Symphony live for the first time. It is widely regarded as the quintessential American symphony, and it was completed one year after the end of World War II, so he really wrote that piece during a time of great turmoil. If I had ever been able to meet Copland, I would have loved to have asked him what his intent was writing that piece given the historical timeframe, and whether he felt sort of a civic duty to write a work that was optimistic and powerful and emotionally deep. I didn’t initially have a commission for it, but it was something I felt that I needed to do, that it was part of my civic duty to bring more beauty into the world. I had never felt that before, and because that was the first presidential election that I had felt very passionate about, I decided that I was going to write my first symphony.

Would you say the musical language of the piece is related to that of Copland?

I don’t think it’s Americana. Some people say my music is very American sounding, that it is incredibly optimistic and energetic. But I wasn’t trying to emulate a Western sound or be anything other than myself.

What keeps you going creatively?

I really feel that as artists, we have to ask ourselves how we can effect and create positive change. Whatever your field is, you have to do it with integrity, and writing music is the best way I can reach people.