“Angels in America” Returns to Juilliard Millennium Approaches, Part I of Tony Kushner’s Angels in America, made its debut as a Juilliard fourth-year production in April 1992. Group 21’s Michael Stuhlbarg (left) played Louis Ironson and Robert Sella was his lover, the AIDS-infected Prior Walter. Kushner was Juilliard’s playwright in residence that year; the production was directed by faculty member Richard Feldman.

(Photo by Jessica Katz, courtesy of the Juilliard Archives)

The apex of the AIDS crisis was still searingly fresh in the collective psyche by the time Angels in America, Part 1: Millennium Approaches, the first installment of Tony Kushner’s Pulitzer- and Tony-winning epic, was given its premiere as a fourth-year production in 1992 at Juilliard. But for its creator, then the playwright in residence here, there was already a sliver of historical distance. 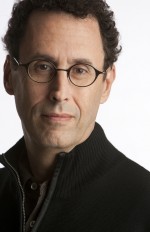 Thousands of gay men had died; AZT and more sophisticated treatment protocols were finally taking effect; and Larry Kramer had immortalized the epidemic’s harrowing early days in The Normal Heart, which opened at the Public Theater in 1985.

“Unlike Larry I’ve always needed to have some sort of distance from the time I’m depicting to be really able to reflect on it and make sense of it,” Kushner said in a recent phone interview with The Journal from his apartment near Lincoln Center. “I rarely write something that’s set in the year in which I’m writing it. And it was already a slightly past event.”

So it comes as little surprise to Kushner that the actors in Juilliard’s Group 44, who later this month will present Millennium Approaches for the first time at Juilliard in 22 years, are approaching the work almost as a period piece.

After all, he said, it wasn’t that long ago that a Stanford professor recounted having asked some American history students if they’d ever heard of Roy Cohn, chief counsel to Joseph McCarthy and advisor to Ronald Reagan. “And one student raised his hand and said, ‘He’s a character in Angels in America,’” Kushner recalled.

“It’s incredible because the history is so recent, and yet the landscape has changed entirely since that time,” fourth-year actor Therese Barbato told The Journal. “That makes it feel almost like a history play in some ways: having to excavate what that was.”

Set in New York in 1985, Millennium Approaches tells the story of two couples whose lives intersect by chance: the AIDS-afflicted Prior Walter and his boyfriend, Louis Ironside, and Harper Pitt, a Mormon housewife prone to Valium-induced hallucinations, and her husband, Joe, an ambitious law clerk and confidant of Cohn’s who’s grappling with his own sexuality.

Using eight actors assigned two or more roles each, the play, according to Kushner’s notes, “benefits from a pared-down style of presentation, with minimal scenery and scene shifts done rapidly (no blackouts!),” and the technology behind the theatrical illusions on full display, “which means it’s O.K. if the wires show.”

For the current production, veteran Juilliard director Lila Neugebauer, who earlier this fall directed A.R. Gurney’s The Wayside Motor Inn to acclaim at the Signature Theater, has envisioned such a spare space, cloaking the theater in an image—comprising 3,000 individual papers to represent “a multitude, literally and figuratively,” she said—of a single man dying alone in his sickbed, the central prop a coffin that can be transformed into a park bench or a table.

With the help of the dramaturg Shana Komitee (who interviewed faculty members about their late colleague Marian Seldes in this issue) and prompts from Neugebauer, the actors have amassed a catalog of research on the epidemic and Angels, which they presented at their first rehearsal. It’s an accumulation that displays “how far-reaching his genius is,” Neugebauer said of Kushner.

For Barbato and Noah Averbach-Katz, who play Harper and Joe Pitt, the assignment was to explore Mormonism; for Robert Aramayo, to delve into the life of his character Roy Cohn; for Brandon Hall, who portrays Belize, Prior’s former boyfriend and best friend, to look at New York City drag culture in the 1970s and ’80s; and for Mallory Portnoy, to accumulate background on Ethel Rosenberg. Meanwhile, Eliza Huberth, the angel, and Justin Mark and Justin Barnes, who portray Louis and Prior, investigated the evolution of treatments for HIV/AIDS.

Neugebauer also asked the actors to watch documentaries including How to Survive a Plague, And the Band Played On, and We Were Here. “The play requires a combination of deep humility but also grandiosity,” she said. “You have to seize it and take it up. And that’s the spirit with which we’re approaching it.”

“Someone said during break, ‘There is blood on the table,’” Aramayo, who is playing Roy Cohn, told The Journal following the first rehearsal. “People were going for it. They were giving their best for this.”

Neugebauer is directing from a script Kushner updated for the Signature’s 2010 production of Angels: a joke trimmed, stage directions clarified, and a new introduction written as the 2012 elections approached. “He says he wrote that introduction perched on the knife’s edge of terror and hope, and of course that space feels to me distinctly where I imagine he might have sat when he first wrote the play,” Neugebauer said. “And it also feels to me very distinctly like the place in which I personally feel we sit a great deal of the time as citizens of a very broken and seemingly imperfectible but spectacularly aspirational America.”

There is a famous scene in Millennium Approaches when Roy Cohn, told by his doctor that he has AIDS, defines homosexuals—a label he rejects—as “men who know nobody and who nobody knows,” he says. “Who have zero clout.”

“I don’t think any group ever in the history of humankind that I know of, fighting for its emancipation, or its enfranchisement, or its liberation and the end of oppression, has ever had to do what the L.G.B.T. community did, and we did it with unbelievable success,” Kushner said. “We not only refused to accept the dominant culture’s eagerness to assign to this biological catastrophe some kind of divine or moral meaning. We rejected absolutely the idea that we were being judged and punished by this disease. The epidemic would become part of the struggle so that by the end of the first terrible years, we had become a stronger and much more politically effective group than we were before.”

For Neugebauer, one of the play’s central questions is, “How do people actually change?”

“I can’t think of a writer who captures more expansively and rigorously both the electrifying thrill of change and the terrible pain and cost and irretrievable loss,” she said of Kushner. “And then the potential for something in that space that we might be lucky enough to call progress.”